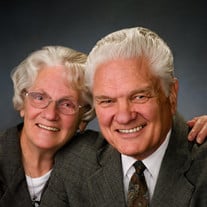 After a 9-year battle with cancer and other health issues, specialty cane maker, David Hugh Bouwhuis, 79, punched his return ticket home on August 1st, 2019 and is now in the arms of his loving Heavenly Father. After losing 4 babies, his parents William Paul Bouwhuis and Jessie Van Orden, were delighted to welcome David as their second of four surviving children on September 22, 1939. David’s family lived in Cache Valley Utah most of his childhood. David graduated from Logan High School in 1957, then began working as an appliance repair man. David served a mission for The Church of Jesus Christ of Latter-Day Saints in the Western Canadian Mission, when it was divided, he served in the new Alaska Canadian Mission the remainder of his mission. Following his mission David attended Utah State University where he met his lovely wife Phyllis Katherine Mason, in a typing class. Dad often said, “The Lord brought her half way around the world for me” (from Maromaku, Northland, New Zealand). They were sealed for time and all eternity in the Logan LDS temple on March 30, 1962. David and Phyllis were blessed with 11 children (6 boys and 5 girls) five of whom were born during the 10 years they lived in Anchorage Alaska. They raised their large family in their current home in Clearfield Utah where they have lived for nearly 45 years. David spent his career as an appliance repairman, a job he loved because of the opportunities it gave for him to meet people and share his testimony of Jesus Christ. The last 30 years of his career he worked for Dick Kearsley Service Center in Clearfield. A faithful member of The Church of Jesus Christ of Latter-Day Saints, David has served in many callings. The callings he enjoyed the most was serving missions. He was ordained a Seventy by Ezra Taft Benson in 1971 while living in Alaska. This allowed him to serve as a mission leader both in Alaska and in Utah. In addition to this David and Phyllis served missions in the Centerville Humanitarian Service Center, Zimbabwe Harare Mission, Farmington New Mexico Mission, Ogden Temple Ordinance Worker, and the Ogden Utah Mission. Many of his children and grandchildren have followed his example of missionary work and have served missions around the world. Through the years David had many hobbies. As a teenager he was an avid roller-skater and won competitions in pairs skating. He was on the high school shooting team. David loved figuring out how to make things. Over the years he made a lot of furniture that was needed for the family. He also made 2 table top croquet sets because Phyllis had one growing up in New Zealand. While living in Anchorage, they raised chickens, pigeons, and rabbits and the grade school kindergarteners and first grade children used to have walking field trips to see the “zoo.” He also made fiberglass canoes, kayaks, and archios (a long snow sled). After moving back to Utah, he raised show homer and roller pigeons, then went on to raising conures. He had a pet cherry headed conure that he used to take around on his shoulders. David also loved to tie quilts and did many for family and humanitarian service. He also made over 1000 small wooden toy cars for humanitarian service. Later he took to building telescopes, two of which he used to take up to Weber State grounds for the 24th of July Pioneer Day celebration for people to look through while waiting for the fireworks. His next love was wood. Wood turnings making a variety of different things. His last hobby was making canes and giving them to people who needed them. When he became an ordinance worker, he saw people coming in with canes of all different colors, so he decided to make white ones for ordinance workers and patrons who needed them when they went to the temple. He gave away 67 white canes. When he was put on medical home confinement and needed a cane himself, he started taking different kinds of wood pieces, turning them on a lathe, and assembling the pieces on a steel rod so they could be glued together and attached a handle to the top. They were truly beautiful, and he made 25 of them. He also tried his hand at raising bees for a few years until his health gave out. David is preceded in death by, his parents, four older siblings, and one granddaughter Taylor Jade Arave. Survived by his beautiful, devoted wife Phyllis, and children, Cherylann (Jeff) Brown of Kaysville, Paul (Cindy) Bouwhuis of South Jordan, Norman (Katie) Bouwhuis of Bentonville, Arkansas, DelVon (Alicia) Bouwhuis of Cedar Hills, Chris (Lynnae) Bouwhuis of Layton, Katherine (Mike) Arave of Clearfield, Myron (Rachel) Bouwhuis of Westpoint, Lorelle (Scott) Hall of Kaysville, Kim (Mark) Hurd of Clinton, Rob (Korrine) Bouwhuis of Midway, and Amber (Adam) Abel of American Fork, 71 grandchildren, and 8 ½ great-grandchildren. He is also survived by his siblings, Steven (Shirley) Bouwhuis of Hurricane, Jon (LeNore) Bouwhuis of Bountiful, Karen (Kent) Cardon of Amalga, and many nieces and nephews. Funeral services will be held at 11 a.m. Saturday, August 10, 2019 at the Clearfield North Stake Center located at 151 north 1000 west Clearfield UT. A viewing will be held 6-8 p.m. Friday, August 9, 2019 and 9-10:30 a.m. at the same location. Internment will be in the Clinton City Cemetery. In lieu of flowers please make donations to your favorite charity in his name. His favorite charity is Humanitarian Services for the Church of Jesus Christ of Latter-Day saints.

After a 9-year battle with cancer and other health issues, specialty cane maker, David Hugh Bouwhuis, 79, punched his return ticket home on August 1st, 2019 and is now in the arms of his loving Heavenly Father. After losing 4 babies, his... View Obituary & Service Information

The family of David Hugh Bouwhuis created this Life Tributes page to make it easy to share your memories.

After a 9-year battle with cancer and other health issues, specialty...