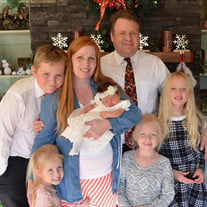 On Friday September 6, 2019, David Clark Goble suddenly returned home to his family in heaven. Clark was born on the 6th of November, 1967 in La Jolla, California. He was raised in Halifax, Nova Scotia and in Waterton, Alberta. He studied physics, mathematics and philosophy, and was regarded as an expert in Mormon Metaphysics, Peircean Pragmatics, computer programming and was a world class chocolatier. Clark was widely considered a pioneer in the Mormon blogosphere, cofounding the first Mormon blog, “Metaphysical Elders”. Clark’s formal work career began in laser design where he worked on the Star Wars Satellite Defense System. Upon leaving college, he and his fellow physics grad, Art Pollard, wrote an early search engine program, which was eventually picked up by Adobe Inc. Always one to pursue a wide range of interests at a high level, Clark and Art later started Amano Artisan Chocolates, where they both became among the world’s top chocolatiers. Clark grew up hiking in the Canadian Rockies, and after settling down in Provo, was surprised how rare it was for people to take 30 mile plus off trail hikes for granted. He always loved the mountains and his heart never left his home in the Waterton-Glacier area. He always strived to pass a legacy of learning and a connection with nature and exploration onto his children. Clark loved his wife and children immensely. He never tired of the time they spent together on hikes and camping trips. Fittingly, his last weekend was spent camping and hiking with his wife and children - something that always brought him great peace and satisfaction. His dedication to his family was immense. He had a unique relationship with each child and loved singing his own songs and rhymes to each one. Even with five children, Clark made it a priority to spend blocks of one-on-one time with each child. The long nights of work this often required were part of the sacrifices he happily made for his family. Clark is survived by his wife Rena Nicole (Green) Goble and five children: Conner Clark Goble, Isabella Kay Goble, Rena Marie Goble, Linnea Noël Goble, and Analise Hazel Goble; his mother Hazel Maurine Fullmer Goble, his father David Franklin Goble, his brother Christopher Vance Goble (Anne Marie Goble) and many nieces, nephews and siblings-in-law. Funeral services will be held at 11:00 am, Saturday, September 14, 2019 at the Slate Canyon 6th Ward, 1315 East 900 South, Provo, Utah with viewings to be held from 6-8:00 pm on Friday evening and again on Saturday to begin at 9:30 am, all at the church. Interment to follow at Provo City Cemetery.

On Friday September 6, 2019, David Clark Goble suddenly returned home to his family in heaven. Clark was born on the 6th of November, 1967 in La Jolla, California. He was raised in Halifax, Nova Scotia and in Waterton, Alberta. He studied physics,... View Obituary & Service Information

The family of David Clark Goble created this Life Tributes page to make it easy to share your memories.