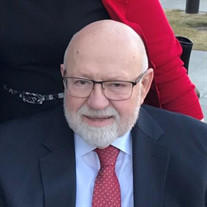 David Nelson Hansen passed away unexpectedly on September 20, 2021. He fought a long and courageous battle with Parkinson’s disease. He was born March 28, 1944 in Salt Lake City, Utah. His parents were Margret Jane Hansen (Merkley) and Rulon Kershaw Hansen from Vernal, Utah. David’s father passed away when he was only 6 years old. Prior to the death of David’s father, Rulon had financed the purchase of the Ivanhoe apartment complex in downtown Salt Lake City to help support his wife and children. David and his family moved to the apartment building where he learned to fix anything and everything. While not a typical childhood, David was surrounded by a loving, extended family. As a young man, David enlisted in the Army Reserves where he ended up serving eight years. During his enlistment, he took a deferment to serve a 33-month mission for The Church of Jesus Christ of Latter- Day Saints in South Bavaria, Germany. He loved his missionary service and developed a lifelong love of Germany and the people there. After returning from his mission, he met and married his sweetheart, Linda Ann Fox, on May 19, 1967 in the Salt Lake Temple. David and Linda had four daughters and a son. He was known as a kind father and his children and grandchildren loved him dearly. They lived in many places including Salt Lake City (Utah), Joppatowne (Maryland), Murrysville (Pennsylvania), Harvest (Alabama), Sterling Heights (Michigan) and finally Saratoga Springs (Utah). David was a gifted academic and continued to learn through every phase of his life. He graduated from West High School in Salt Lake City. David was a proud University of Utah graduate where he earned his Bachelor’s degree in Chemistry and his Ph.D. in Metallurgy. While working for the Department of Defense early in his career, he took mechanical engineering classes at Johns Hopkins in Baltimore and in his sixties, earned a Master of Science in Product Development at University of Detroit Mercy. He was a faithful member of the Church of Jesus Christ of Latter-day Saints and always tried to serve diligently. Some of his callings included serving on the Ward Activities Committee, working in the family history center, on the High Council, as Bishop, and as a member of the stake presidency. But his main job was engineering Linda’s grand plans. Whether lighting the piano recitals, decorating amazingly for ward and stake parties or helping their children to fix up their houses, they were an amazing team and were each other’s best friend. Although we’re sure Mom and Dad are happy to be together again, his family will miss him beyond words. David was predeceased by his parents, Rulon and Margret Hansen, his siblings Lois (Kelsey) Chatfield, and Ruel (Pamela) Hansen. His beloved wife, Linda Ann Fox Hansen passed away just 3 months and 3 days before him. They endured their illnesses at the same time but through it all they depended on each other to the end. David is survived by his children, Rebecca (Ken) Stewart, Christina (Mark) Golding-Jewett, Jason (Heather) Hansen, Mary (Mickey) Jones, and Allyson Hansen, as well as 16 grandchildren and 5 great grandchildren. Services will be held on September 25, 2021 at the address listed below. The viewing will be held from 10:00 to 10:45am, with the funeral at 11:00am. The graveside service will be at 3:00pm followed by the interment in Orangeville, Utah at the Orangeville City Cemetery. Flowers can be delivered on September 25th between 9:00-9:30am to the Church of Jesus Christ of Latter-day Saints at 587 South Saratoga Road, Saratoga Springs, Utah 84045. In lieu of flowers, donations can be made to the Parkinson's Association at Parkinsons.org. Join Zoom Meeting https://us02web.zoom.us/j/85256499050 Meeting ID: 852 5649 9050 One tap mobile +13462487799,,85256499050# US (Houston) +16699009128,,85256499050# US (San Jose) Dial by your location +1 346 248 7799 US (Houston) +1 669 900 9128 US (San Jose) +1 253 215 8782 US (Tacoma) +1 312 626 6799 US (Chicago) +1 646 558 8656 US (New York) +1 301 715 8592 US (Washington DC) Meeting ID: 852 5649 9050 Find your local number: https://us02web.zoom.us/u/keIhGbaRql

David Nelson Hansen passed away unexpectedly on September 20, 2021. He fought a long and courageous battle with Parkinson&#8217;s disease. He was born March 28, 1944 in Salt Lake City, Utah. His parents were Margret Jane Hansen (Merkley) and... View Obituary & Service Information

The family of David Nelson Hansen created this Life Tributes page to make it easy to share your memories.