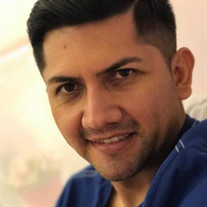 David Ubaldo Montecinos 1978 - 2022 The meaning of the name David is “the beloved.” And David is certainly that. He is fiercely, and deeply loved by his wife Gena, his dear parents (Lucio and Bethsabe), his three brothers (Roger, Daniel and Rodolfo) and his five sisters (Sofia, Amanda, Madeleyne, Marisol and Tatiana). This love extends to all his many nieces, nephews, all his in laws that he considered his brothers and sisters as well, and all that had the privilege of knowing him, including dear friends close to him and at a distance who he loved very much. Even though he has been called back home by the Lord to help on the other side of the veil (January 15, 2022), and we are missing him more than words can say, we are grateful that he continues to be ever present in every moment of our lives and he will forever be remembered. David’s legacy is one of great courage, intelligence, great talent, ease of expressing love and kindness, and a deep love for the Lord and the Gospel of Jesus Christ. He worked hard with faithful people and was eager to help in anything he could, he drew closer to our Heavenly Father everyday. He was always ready for a blessing because he knew he would receive the needed guidance through them at any given time. He is certainly a chosen son of our Heavenly Father who came to earth to shine like a shooting star, change the lives of all who met him for good, and then return home to continue his great work there while still inspiring us, loving us, protecting us and teaching us; because that is just the way our beloved David is. David Ubaldo Montecinos was born on October 5, 1978, in La Paz Bolivia. From an early age, David showed his desire to make a difference in the world. He didn’t mind waking up early in the morning as an 8 year old child to rush down the street to challenge his dad to run to the bus station as he went to work. He was never too tired to go with his younger brother Rodolfo to play soccer down the street and play there for hours, or follow his brother Roger to train for soccer at a prestigious academy where he shined as a goalkeeper where his dear mother would cheer loudly for him (and cheered for him in all the facets of his life). He loved going to play games at a local store and beat any challenger in any game. He showed entrepreneurship abilities when, as a child, he decided to rent an ice cream cart and started to sell ice cream on the streets. In time, he followed his parents and siblings and moved to Utah. He completed an undergraduate degree at Brigham Young University and later obtained a Master’s degree in business administration. While attending Brigham Young, he joined the performing group Living Legends, where he made an impact by creating choreographers for Bolivian traditional folklore dances, as well as for other dances. In fact, he performed Polynesian, American Indian and Latin American dances admirably. The group travelled to different places in the United States and abroad and changed the lives of many people, especially the youth, by giving them a message of love, hope, and of the Gospel. His Living Legends friends were always in his heart and he in theirs. They showed up for him in many ways and he truly appreciated their love. David's amazing dancing skills made him a sought after dancer and you could see him dancing in different venues in the state of Utah and he even started a Dance Studio with his sister where he taught Brazilian Dance Aerobics and other dances. He met dear and long lasting friends there. After graduating from BYU, David started a career in the financial industry and became a successful financial advisor at e-trade. He passed difficult tests with little difficulty and advanced in his career, and was loved by his managers. While working there, he met the love of his life, Gena Trinidad and married her in February of 2014. They were inseparable and you could never see one without the other. David’s and Gena’s love and faithfulness for each other should inspire many. David’s love for his parents was also very palpable. He was always making sure that his mom was okay and that she had all that she needed and expressed his love towards her constantly. He also thought of his dad always, whom he was the splitting image of, and wanted him around all the time. David's fluency in three languages, Spanish, English and Portuguese opened up many doors for him and he discovered yet another remarkable talent in his photography that left many memories for us to enjoy. One of his many other talents involved working with computers, and specifically animation. In fact, he and his brother Daniel collaborated in creating the first ever animated family comics, which always resulted in roars of laughter! David had a silly side that could always make you smile, especially with his funny sayings or comments, and his contagious laughter. David also loved his dog Thor, who was his bodyguard. You needed to pass Thor’s sniff test before you could even approach David. Please join us to celebrate his life this coming Wednesday, Jan 19, 2022 at the Cranberry Farms 1st Ward (see address below). Viewing will be from 5:30 p.m. to 6:45 pm and the service will be at 7:00 p.m. Please wear white clothes, at least a white top. We appreciate those who can take the time to be there physically but a link will also be provided later for a live broadcast for those that cannot attend. Please feel free to share the invitation. Funeral services will be 7:00 pm, Wednesday, January 19, 2022 at The Church of Jesus Christ of Latter-day Saints chapel at 3155 Garden Drive, Lehi, UT with a viewing prior to services from 5:30pm to 7:45 pm.

David Ubaldo Montecinos 1978 - 2022 The meaning of the name David is &#8220;the beloved.&#8221; And David is certainly that. He is fiercely, and deeply loved by his wife Gena, his dear parents (Lucio and Bethsabe), his three brothers (Roger,... View Obituary & Service Information

The family of David Ubaldo Montecinos created this Life Tributes page to make it easy to share your memories.

The meaning of the name...