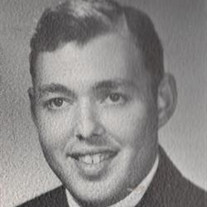 Intelligence Specialist First Class Petty Officer David Leslie Peplow passed away on July 26, 2015 in Salt Lake City, UT due to complications resulting from Alzheimer's disease. He was 65. David was born on September 23, 1949 in Waynesville Missouri to Carl Warren and Francis Lucille Peplow. Growing up on a farm he graduated from Gowler High School in 1967 and joined the Navy shortly thereafter in November 8, 1967. David spent a total of 20 years, 1 month, 29 days and retired twice doing what he loved most. He has served on the USS Caliente, USS Ranger and the USS Eisenhower. He served in the Korea War and the Vietnam War. Letters of commendation, appreciations, recommendations for advancement, awards for good conduct, outstanding performance, recognitions from the fleet admiral and more was given to him throughout his history in the Navy. David's duties in the Navy included: Analyzing intelligence information; identifying and producing intelligence from raw information; assembling and analyzing multi-source operational intelligence; preparing and presenting intelligence briefings; preparing planning materials for photographic reconnaissance missions; analyzing the results; preparing reports; preparing graphics, overlays and photo/map composites; plotting imagery data using maps and charts; providing input to and receive data from computerized intelligence systems ashore and afloat; maintaining intelligence databases, libraries and files. David Served in a variety of different jobs all over the globe. Some common places to find him was on aircraft carriers and shore installations. David traveled the world during his years of service. He has visited Korea, Guatemala, Israel, Philippines, Japan, New Zealand, Italy and surely more places than most know. David had many hobbies which includes: Chess, macrame, leather working, fantasy books and sci-fi shows. David loved Philly cheese-steaks, grape juice, waffles, PB&J and breakfast (as long as he made it). David was patient and very supportive. He was a very loving Father, Husband, Brother and Son. He always cherished the times he had with his family and always talked about life as a youngster with his brothers on the farm. David is survived by his Brother Wayne, Brother Michael, Brother Ronnie, Son Michael, Daughter Aston, Son Joey, and Granddaughter Violet. He is preceded in death by both of his parents, Daughter Lisa and Grandson Davon. David is loved dearly and will be greatly missed. He was an important part of so many people lives. Things will not be the same without him but memories he has given, his smile, his hugs, his words will live on with all of us forever. David will be laid to rest in a private ceremony at Camp Williams with full military honors on Friday July 31, 2015. On behalf of a grateful nation, proud Navy, supoorative family and friends, thank you so much. Find your place in the stars. Love you forever. Rest in peace.

The family of David Leslie Peplow created this Life Tributes page to make it easy to share your memories.