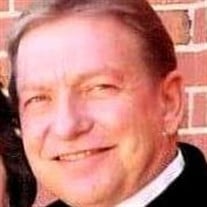 David Lee Qualls 1950 - 2018 With broken hearts and trembling hands, we as a family say farewell to our rock of strength and wisdom. David "Dave" Lee Qualls will always be remembered as a man dedicated to his family's well-being and comfort, even if it were to cost him everything he had. Dave, was born on April 20, 1950 in Salt Lake City to Marion and William Lee Qualls. He was the youngest of there are four children with three older sisters. He graduated from South high school in June 1968. He served a two year mission in Japan. He later met and married the love of his life, Charlette Hicks in the Salt Lake Temple on June 29, 1973. along with Mindi and Doyle who were sealed to them that day, for Time and all Eternity. He will be greatly missed as he stepped across the veil and returned home to his Father in Heaven. Dave is reunited with his loving parents, William Lee and Marion Kingdon Qualls, a sister Judy Woosly and his son, Doyle Bryan. And more recently his niece Lisa Mecham. He will be forever be cherished by his eternal companion, Charlette and their five children: Mindi (Mark), Doyle, David (Lindsey), Lori, and Paul (Natalie). He is also loved and remembered by his 9 grandchildren: Marcus (Claudia), Mandi, Mason, Megan (Ruben), Isabella, Jorge, Mateo, Catalina and Atticus. His legacy is marked by his concern for each of his family members as his most precious mortal treasures. Prior to passing, he also celebrated the birth of 3 great-grandchildren with another on the way: Brayden, Sophie, Zeke and Aria. Also his four great grand children Jaxon, Thomas, Landon and Ameilya. His two sisters Karen Garner, and Gayle Rudolph along with many nieces and nephews. Aside from spending time with his family, and working as The purchasing and Inventory coordinator for Granger medical. He enjoyed golfing and serving in his ward and community. Undoubtedly his life's mission was to do as the Savior would by giving of himself freely to those around him, even until his final hours. Funeral services will be 11:00 am, Saturday, December 22, 2018 at the Hunter 17th Ward Chapel, 3745 South 6400 West, West Valley City, Utah where a viewing will be Friday from 6:00 to 8:00 pm and Saturday prior to services from 9:45 to 10:45 am. Interment at the Taylorsville Cemetery. In lieu of flowers please consider donating, this was an unexpected, and untimely loss in our family. A gofundme page is being set up, and info will be added at that time.

David Lee Qualls 1950 - 2018 With broken hearts and trembling hands, we as a family say farewell to our rock of strength and wisdom. David "Dave" Lee Qualls will always be remembered as a man dedicated to his family's well-being and comfort,... View Obituary & Service Information

The family of David Lee Qualls created this Life Tributes page to make it easy to share your memories.

With broken hearts and trembling...