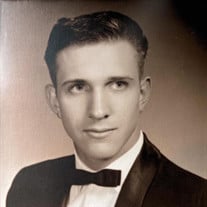 Our much-loved husband, father, grandfather, brother, and friend, David William Spencer, passed away peacefully March 27, 2022 in Farmington, Utah. He was born September 11, 1946, in Colorado Springs, Colorado to William Don Spencer and Helen D. Spencer. He spent his early years in Colorado Springs and moved to Blackfoot, Idaho as a young child and grew up there. He also achieved the highest ranking in Boy Scouts by earning his Eagle Scout in 1961. He played on the Blackfoot High School football team and was in the newspaper October 2, 1963 for being one of the top players. The team named David’s friend and David, “Dash and Dart” for their quick defensive tackle for their line piercing abilities. He graduated from Blackfoot High School in 1964. He enlisted in the US Army and graduated from Officer Candidate School. He was stationed four years in Germany where he met and married Renate Schorr. They had one daughter, Jackie, and were later divorced. Upon his honorable discharge, he lived in Idaho and Utah. He met Carol Lee Weidemann and they had three children, Phillip, Chelsie, and Sarah. He worked various jobs throughout his life taking care of his beloved companion Carol and Phillip, his son. He is survived by his companion, Carol Lee Spencer and his children, Jackie Spencer, Phillip Spencer, Chelsie Spencer and Sarah Spencer and grandchildren, Melly Spencer and Amy Spencer. He is survived by his sister Kathy (Karl) Young and his brothers, Daniel (Julie) Spencer and John (Bonnie) Spencer. He was preceded in death by his parents William Don Spencer and Helen D. Spencer, his brother Stephen D. Spencer and his sister Kaylynn Voyles. The graveside services will be held Friday, April 29, 2022 at 1:00 pm at the Utah Veteran Cemetery & Memorial Park at 17111 Camp Williams Road, Bluffdale, UT 84065. He will be buried with military honors.

The family of David William Spencer created this Life Tributes page to make it easy to share your memories.