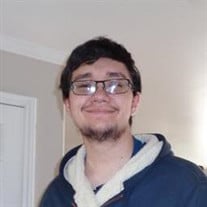 David Spencer Van Horn, May 13, 1999 to December 13, 2017. David passed away in the intensive care unit of the Timpanogos Regional Hospital on Wednesday morning, December 13, 2017. He was born on May 13, 1999 in American Fork, UT to Kevin and Emma Van Horn. He attended Meridian School and Karl G. Maeser Preparatory Academy, graduating high school in May 2017. He was finishing his first semester of studies towards a B.S. in Computer Science at Utah Valley University. David was a kind and gentle soul who genuinely cared about the people around him. He was honest and thought seriously about matters of right and wrong. This was apparent even from a young age. He had an analytic and inquisitive mind, often going beyond the textbook answer to ask, "how do they know that?" He was adept at using Internet resources to teach himself many things about computer science and mathematics. He loved computer games, and wrote several of his own games. He was fun to banter with, talking about many different topics. He was always looking for an opportunity to make a joke, especially puns. He often used humor to defuse tense situations. David's family wish to thank the friends, neighbors, and extended family members who showed so much love, support, and generosity to them in the difficult and painful days preceding his death. David is survived by his parents, Kevin and Emma Van Horn, and three siblings, Zoe, Natalie, and Elena Van Horn. The funeral service will be 11 a.m., Tuesday, Dec. 19, 2017 at the LDS chapel at 1485 N. 800 W., Orem, UT. Burial will follow immediately afterwards at the Orem City Cemetery, 1520 N. 800 E., Orem, UT. There will be a private viewing for family and friends prior to the funeral, at 10 a.m.

The family of David Spencer Van Horn created this Life Tributes page to make it easy to share your memories.