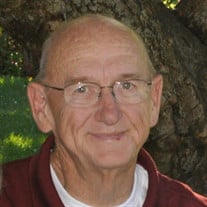 Dave Carl Weatherhead passed peacefully from this earth in his own home on the morning of September 26, 2020. Dave was born on September 13, 1947 in Middlesborough England. He was adopted on June 1, 1948 by his loving parents Thomas and Ursula “Sheila” Weatherhead. They moved from England when Dave was three years old and landed in Elba Idaho where they became good friends with the Barker family. Even after moving to Salt Lake City they continued to visit the Barker family and help on their family farm. He had many fond memories of working on the farm. Dave grew up in Salt Lake City and met the love of his life, Marsha Bruening Weatherhead, when he was sixteen. They continued to date when he joined the military in 1967. Dave served with the Navy for four years and was honorably discharged in 1971. Dave and Marsha married on June 20, 1969 and was sealed for time and all eternity in the Salt Lake City temple. Dave was a proud South High School graduate and later continued his education at the University of Utah where he obtained his Bachelor’s degree. Dave was a die-hard Utah fan. He was a season ticket holder for 30 years. You could often find him in the photos of the south end zone along with his good friends the Erickson’s. His favorite song to sing to the grand babies was the Utah fight song. He loved to golf especially with his family and his good friend Randy. Dave was a hard-working individual who genuinely loved his family. He loved to go on road trips with his wife and spend time with each another. They would talk about the past and their life together. Everything he did was for his family. You could always count on Grandpa Weatherhead to be in the outfield watching a baseball or softball game, on the sidelines for a soccer or lacrosse game, in the audience for dance or theater performances, and sitting in primary to listen to a talk or prayer given by his grandchildren. He wanted to celebrate all of their important milestones. He even became Grandpa “toothfairy” and would send a surprise in the mail each time a grandchild lost a tooth. Dave had the biggest heart. His goal in life was to love and care for his family. Dave is now reunited with his parents and celebrating the reunion. He is survived by his wife Marsha, his children Jason (Janice), Holly (Victor), Lee (Emma) and grandchildren Tyson, Amanda, Hunter, Isabella, Lilly and Ava. We will be celebrating Dave’s life with a small family graveside service. The family would like to thank everyone for their support during this difficult event. Graveside services will be held at 1:30 pm, Wednesday, September 30, 2020 at Elysian Burial Gardens, 1075 East 4580 South, Millcreek, Utah with a viewing to take place from 12 noon to 1:00 pm, also on Wednesday, at Premier Funeral Services, 67 East 8000 South, Midvale, Utah.

Dave Carl Weatherhead passed peacefully from this earth in his own home on the morning of September 26, 2020. Dave was born on September 13, 1947 in Middlesborough England. He was adopted on June 1, 1948 by his loving parents Thomas and Ursula... View Obituary & Service Information

The family of David Carl Weatherhead created this Life Tributes page to make it easy to share your memories.

Dave Carl Weatherhead passed peacefully from this earth in his...