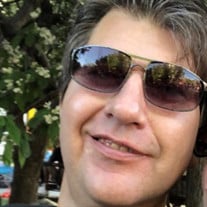 David Jacob Westlind was born April 21,1972 to Burton Clare Westlind and Edith Eva Pickles Strahl in Cando, North Dakota. David was suddenly called home to be with his Heavenly Father on May 25 2019. David spent two summers of his childhood with his father and grandparents in Cando, North Dakota. He spent the school years here in Utah with his mother and brothers. David Graduated high school in 1991 then worked at several jobs in Salt Lake City. He met his wife Julie at one of his jobs at the SLC airport. David and Julie where married December 7, 1992. David served his county from February 1993 to February 2013, completing 20 years in the United States Marine Corps. During David's first four years he was with 7th motors in which he was an engine mechanic on 5- Ton trucks, LAV's, and hummers. After four years in the Marine Corps, David did a LAT move and became a 6124 Aviation Mechanic where he built and re-built Huey Aircraft engines. David's 20 year Marine Corps career took him and his family on many adventures, David was stationed in California at Camp Pendleton Marine Corps Base, Okinawa Japan, New River Air Station Jacksonville NC, and toured the Middle East while serving on an East Coast Ship "Float". He also served on a West Coast Ship "Float". David is also an Iraq War Veteran, and served his country well. David loved to take his older children, when little, to go fishing on the pier while his wife was at work. He would always tell Julie, “This is how I keep the house clean". David loved to take his little kids to and from school as a stay at home dad. Once he retired from the Marine Corps, he would take his kids to the skate park and many places. David loved his little family so much that in 2008 he took his wife, children and mother to the Raleigh Durham North Carolina LDS Temple to become sealed together forever as an Eternal Family. David is preceded in death by his grandpa Eugene Clare Westlind, grandmother Erma Cartwright, grandpa William Osborne Pickles, grandmother Dorothy Lucille Olorenshaw "Renshaw", step-father Bernhard Helmut Strahl, father in-law William Charles Barney,and mother in-law Norma Jean Christensen. David is survived by his wife Julie Ann "Barney" Westlind; four children, David Jr, Kasindra Jean "Kassie", Summer, and William "Billy"; brother's and their spouses Todd (Lisa), William "Bill" (Shelly); step-siblings Anthon (Tammy), David Leroy (Kathy) and Robert “Rob” (Teresa); brother in-law and spouse Kenneth (Randee), nephews, nieces, uncles, aunts, many cousins, numerous loved ones and friends. Funeral services will be held at 12 noon, Monday, June 3, 2019 at the Westland 7th Ward, 7115 South 3200 West, West Jordan, Utah with a viewing prior to begin at 10:00 am. Interment to follow at Utah Veterans Memorial Park, 17111 South Redwood Road, Bluffdale, Utah. David was a loving and dedicated husband, father, son, brother, uncle, friend and Hero. David was loved by all and he will be missed dearly, Semper-Fi.

David Jacob Westlind was born April 21,1972 to Burton Clare Westlind and Edith Eva Pickles Strahl in Cando, North Dakota. David was suddenly called home to be with his Heavenly Father on May 25 2019. David spent two summers of his childhood... View Obituary & Service Information

The family of David Jacob Westlind created this Life Tributes page to make it easy to share your memories.