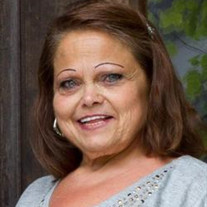 Dawn Marie Kennedy Arb, 53, resident of West Jordan, Utah, passed away on February 16, 2014, at her home after a long battle with asthma. She was born in Bainbridge, Maryland on August 9, 1960, to Timothy Kennedy and Kathryn Landon. Dawn attended Shelley High School and graduated in 1978. Dawn married Richard Arb in 1980 in Salt Lake City, Utah. After a short period of time in Utah, they moved to Idaho Falls, Idaho where they raised their two children, Christine and Sheldon. In 1992 she was sealed in the Idaho Falls temple. Dawn relocated with her husband to West Jordan, Utah in 2010 to be closer to her grandchildren. Dawn spent the majority of her career working with special needs students and later went to work in the hotel hospitality industry. She spent the last years of her life doing what she loved most, being a grandma. Dawn was a mother and voice of reasoning to everyone who came into contact with her. She always had the perfect words to say. She welcomed everyone into her home with love and open arms. Her laugh was contagious and you couldn’t help but smile and be happy when she was around. She was preceded in death by; grandparents, Eula & Spencer Kennedy and James Baker and step-father, Max Landon. She is survived by her husband of 34 years, Richard Arb of West Jordan, Utah; her children, Christine (Brandon) Turner of Bluffdale, Utah, Sheldon (Sheena) Arb of South Jordan, Utah and Markus Farnsworth of Salt Lake City, Utah; 5 grandchildren, Kennidie & Kannen Arb, Kyson & Kennastyn Turner and Zion Farnsworth; her mother, Kathryn Landon of Shelley, Idaho; father Timothy (Barbara) Kennedy of Buckeye, AZ; grandmother, Naomi Baker of Idaho Falls, Idaho; 3 brothers, Rodney, Greg and Scott; 4 sisters, Laura, Rebecca, Pamela and Wendy, several aunts, uncles, nieces, nephews and many others that she considered family. A viewing for friends and family will be held on Thursday, Februrary 20, 2014 from 6:00pm - 8:00pm at Nalder's Funeral Home in Shelley, ID (110 W Oak Street). Funeral services will be held on Friday, February 21, 2014 at 11:00am at Shelley First Ward in Shelley, ID (184 N. Park Avenue) with a viewing one hour prior.

Dawn Marie Kennedy Arb, 53, resident of West Jordan, Utah, passed away on February 16, 2014, at her home after a long battle with asthma. She was born in Bainbridge, Maryland on August 9, 1960, to Timothy Kennedy and Kathryn Landon.... View Obituary & Service Information

The family of Dawn Marie Kennedy Arb created this Life Tributes page to make it easy to share your memories.