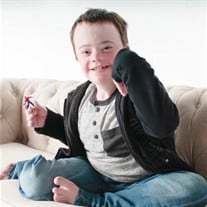 Daysen J Luck, 13, returned to his loving Heavenly Father on March 23rd, 2019. He passed peacefully with a smile on his face while sleeping next to his dad. Daysen was born June 6th, 2005 in Sandy, Utah. Daysen was born to Bryan and Laurel... View Obituary & Service Information

The family of Daysen J Luck created this Life Tributes page to make it easy to share your memories.

Daysen J Luck, 13, returned to his loving Heavenly Father on...