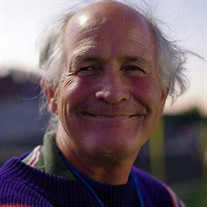 Dean Von Memmott 1956 - 2016 Dean Von Memmott - Orem, UT- Age 59, Dean died on April 5, 2016 in Orem, UT. He was born on December 29, 1956 in Orem, UT to Ione Draper and Clark Memmott, and was the second child out of six children. Dean was born with a such a zest and enthusiasm for life that he could never stand still or talk slow. He was a good man: genuine, true and kind-hearted. Dean loved writing and majored in journalism at Brigham Young University,graduating with a BA in 1981. He wrote his own sports blog, which covered prep sports in Utah county, where he applied his own unique brand for each team. His sense of humor and passion for athletics radiated through his writing. To support his journalism, he worked as a janitor at Lehi High School for over 10 years. He also continued to give after his death with bone and tissue donation. He was preceded in death by his father, Clark Memmott. Dean passed one day before his mother, Ione D. Memmott. He is survived by his siblings: James (Marilyn) Memmott, Carrie Sanchez, Jerald Memmott, Nancy Memmott, Sherrie(Roger) Memmott-Harding, and five nieces and one nephew. Funeral services will be held 11:00 am, Monday, April 11, 2016 at the LDS church located at 1020 East Sunburn Lane (11600 South)Sandy, UT with a viewing held the same morning from 9:30 AM to 10:45 AM at the church. Interment will be the same day at 2:00 pm, at the Vine Bluff Cemetery in Nephi,UT.

The family of Dean Von Memmott created this Life Tributes page to make it easy to share your memories.