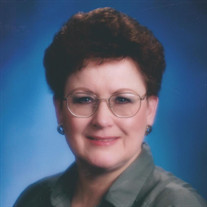 Deanna Edwards 1938 - 2020 Our beloved mother, Deanna Edwards, was born on January 14, 1938, in Ogden Utah, to Lawrence Alton Edwards and Mildred Hansen Edwards. She died in Orem, Utah, on October 11, 2020 after five bedridden years in assisted living facilities. During those five years she was always amazingly upbeat, cheerful, and content despite being paraplegic. She read voraciously, especially enjoying mystery novels. In her last year she shifted to listening to many books on tape. Deanna was the oldest of six children: Deanna, MaryAnn, Jean, Jim, Shirley and Marie. She lived in Ogden for much of her life, even helping her dad build their 7th Street home when she was 11. She attended a brand new high school, Ben Lomond High, graduating in 1956. She sang in several school choirs. After high school, she attended Weber College in Ogden for two years and then began working in banking in Ogden and then in California. She met Ralph Sampson at Weber College and wrote him while he served as a missionary. They were married on December 16, 1960, in the Salt Lake Temple of the Church of Jesus Christ of Latter-day Saints. Kent was born in 1961. They moved to Logan where Ralph attended Utah State University, living in the Triads married student housing. Scott was born exactly two years after Kent in 1963. They moved to New Jersey where Ralph started graduate school at Columbia University. Brent and Sharon were born while living in New Jersey, in 1966 and 1969. In 1969, the family moved to Providence, Utah, near Utah State University. Deanna and Ralph divorced in 1974. She married Golden Linford and moved to his home in Rexburg, Idaho in 1977. They divorced in 1986. Deanna then moved back to Ogden. She worked as the Assistant Manager at Applied Technology Center (ATC) College Bookstore until 1998. She was a faithful member of the Church of Jesus Christ of Latter-day Saints. She especially loved teaching children to sing. Her son remembers she always had huge rolls of paper that she wrote the song lyrics on as part of her calling as Primary Chorister. She also served as a Relief Society President and in other callings. Her favorite things were music and being creative with kids. She regularly put together creative projects for her grandchildren. She loved being a grandma, and babysat her grandchildren extensively. As mentioned previously, she will be remembered for being content, grateful and cheerful throughout her life. Despite many hardships she rarely if ever said a disparaging word. She is survived by her four children: Kent (Shari) Sampson of Ammon, Idaho, Scott (Kristin) Sampson of Orem, Utah, Brent (Isabel) Sampson of Layton, Utah, Sharon Sampson of Anthem, Arizona, and fourteen grandchildren: Jeremy, Billy, Bradley, Jared, Lindsey, Kelsey, Ryan, Summer, Becky, Brent, Jr., Joshua, Brian, Cayden and Alyvia. She also has fifteen great grandchildren. Funeral services were assisted by Premier Funeral Services. The funeral was held on Saturday, October 17, 2020. Interment is at the Orem City Cemetery. Condolences and memories may be sent to the family at http://www.premierfuneral.com

The family of Deanna Edwards created this Life Tributes page to make it easy to share your memories.