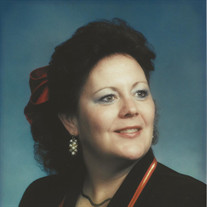 On March 19, 2022, our beloved Deanna Lynn Williams passed away peacefully surrounded by friends and family. She was the perfect wife, mother, Nana, and friend. Deanna was born on January 2, 1957 to David R Free and Deanna Jean Erickson in Salt Lake City, UT. She was the second of three children. She married the love of her life, Michael J Williams, on September 15, 1975 in the Salt Lake Temple. They were an amazing example of love and devotion to everyone who knew them. Mike and Deanna were blessed with three boys. She embraced motherhood with grace. Her family was her greatest pride and joy. She loved to be with her family and would do anything her boys would do. She would try anything and go anywhere to be with her husband and sons, which meant that she would often go boating, camping, or hunting with her boys even though she was the only girl there. Her home-cooked meals proved that she was the best cook in the family, and her precise aim proved that she was the best shot, too. Deanna drew everyone in with her cheerful presence. She loved to bring other people joy and made everyone feel accepted and loved. She was a beautiful example of Christlike love and understanding. Somehow, Deanna made time to craft. She was skilled in tole painting, sewing, and quilting. She also made beautiful porcelain dolls and crocheted her famous hot pads. Her crafts often became precious gifts to those that she loved. Deanna’s hard work extended outside of the home as well. When her children were older, she worked as a librarian for many years in Rock Springs, Wyoming. Later, upon moving to Utah, she worked as an office manager at Shared Pharmacy. As the matriarch of our family, she ensured that our family’s foundation was built firmly upon the gospel of Jesus Christ. Deanna was a strong member of The Church of Jesus Christ of Latter-Day Saints, and she knew her Heavenly Father loved her. She held many callings, such as Young Women’s president, primary teacher, ward organist, and service missionary. Deanna’s greatest talents were being a wife, a mother, and especially a grandmother. She had great pride in her eleven grandchildren, she would make every Christmas a memorable holiday, and each milestone magical. Her happy place was at the cabin, watching the grandkids running around with Mike cuddled next to her. We will remember her fondly, and she will be deeply missed by all who knew her. She is preceded in death by her parents David and Deanna Free. She is survived by her husband Michael, three boys Justin (Jennifer), Tyson (Amber), Brian (Sarah) and eleven grandchildren. The family would like to thank those who helped care for Deanna over the last few weeks after her diagnoses. She received much love from those at St. Marks Hospital, Harmony Home Health and Hospice. The family would also like to thank personally Dr. Jared Probst, and Dr. Grant Hunter for their devoted time and resources. A viewing will be held on Thursday March 24 from 6:00 – 8:00 pm and on Friday from 10am -10:45 at the Hillcrest Stake Center 8485 South 1000 East Sandy, Utah 84094. Funeral services will be held on Friday March 25 at 11:00 am at the Hillcrest Stake Center 8485 South 1000 East Sandy, Utah 84094.

On March 19, 2022, our beloved Deanna Lynn Williams passed away peacefully surrounded by friends and family. She was the perfect wife, mother, Nana, and friend. Deanna was born on January 2, 1957 to David R Free and Deanna Jean Erickson in Salt... View Obituary & Service Information

The family of Deanna Lynn Williams created this Life Tributes page to make it easy to share your memories.