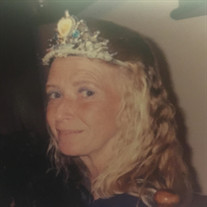 Deborah Lynn Williamson Christensen of Sunset, Utah, passed away peacefully from cancer at her home with her loving family by her side. She will be greatly missed by all. Her parents are Jack Clark Williamson and Janet Barnes Williamson of Clinton, Utah. She was born on October 2, 1955 in the old Dee Hospital at 24th Street and Harrison Blvd, Ogden, Utah. She was married to Mark L. Gregory and together they had one son, Christopher M. Gregory. Mark and Debbie were later divorced. She then married Randal G. Christensen. She graduated from Clearfield High School in 1973. She lived in Clearfield, Kanesville, Clinton, Roy, and Sunset, Utah. She loved playing all kinds of sports, dancing, snowmobiling and camping. Her son, Chris, was the joy of her life, and her daughter-in-law, Nikki, was her best friend and caregiver. She adored her granddaughter Kodie, and her great grandson, Tatum. She loved her pets – dogs and cats. She always had a beautiful garden with flowers and vegetables, with plenty of beautiful flowers and plants in her home and a sense of humor that would light up a room. She worked at several places including Hill AFB until she retired. She is survived by her husband, Randal Christensen; son Chris (Nikki) Gregory, of Sunset; her parents, Jack C. Williamson and Janet Barnes, of Clinton; and granddaughters, Kodie Gregory, Nikole King and Faith Davis; and great grandchildren; Tatum, Kyler, Emilia; and Aunts, Uncles and cousins. She was preceded in death by her sister, Lori Stewart; nephew, Andrew Stewart; and both sets of grandparents. Viewing will be Thursday March 2, 2017 at Clinton 6th Ward, 2223 north 1000 West, Clinton, Utah, at 11:00 AM until 1:30 PM. Graveside services at 2:00 PM and internment will be at the Clinton City Cemetery, 750 West 800 North, Clinton Utah. A family luncheon will be served back at the Clinton Ward building after the Graveside. The family wishes to extend a special thank you to Dr. Gray and Hearts for Hospice for their loving care of our daughter, mother and grandmother.

Deborah Lynn Williamson Christensen of Sunset, Utah, passed away peacefully from cancer at her home with her loving family by her side. She will be greatly missed by all. Her parents are Jack Clark Williamson and Janet Barnes Williamson... View Obituary & Service Information

The family of Debbie Williamson Christensen created this Life Tributes page to make it easy to share your memories.