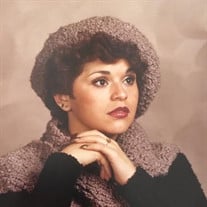 Debbie Villalobos 1957 - 2016 Our beautiful mother Debbie Villalobos passed away peacefully Thursday April 14, 2016. She was born on February 5, 1957 in Ogden, Utah. The daughter of Delfin and Tillie Romero. Debbie grew up in Sunset, Utah and went to Clearfield High School. She married Renee Luevano and later divorced. They had 2 sons Matthew and Joshua Luevano. She later married Nicholas Villalobos and they had 2 sons Nickademus and Lucas. Debbie was truly one of a kind. She was a talented hairstylist who enjoyed making others look and feel beautiful. Her 7 grandchildren brought her greatest joy. She was a beauty who was fun spirited and had a true love for the lord. This world will not be the same without her, but we know that her faith in the lord is now confirmed. Debbie is preceded in death by her father, Delfin Romero. She is survived by her mother Tillie Romero, her sons Matthew & Joshua Luevano, Nickademus, & Lucas (Paige) Villalobos, and Kevin Specht who she also considered her son, 7 grandchildren, brothers and sister George Romero, Delfin Jr. Romero, Kattie (Marcos) Martinez, Randy (Joanne) Romero, and many nieces and nephews. A church service will be held in Debbie’s honor 11:30 a.m., Wednesday, April 20, 2016 at Alpine Church, 5050 S 1275 W, Riverdale UT,. All are welcome to attend a luncheon and celebration of life to follow the church service at the Elks lodge 1875 W 5200 S Roy UT, 84067. The family would like to express gratitude to the many relatives and friends who have shown their support to our family through this difficult time.

The family of Debbie Villalobos created this Life Tributes page to make it easy to share your memories.