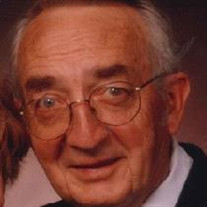 DEE HOLT GWILLIAM Dee Holt Gwilliam passed away on October 13, 2017 at the age of 85. He was born on August 3, 1932 in Ogden, Utah to Bessie Holt and Henry Ernest Gwilliam. He was the fourth of five children. Dee grew up in West Point, Utah, where he enjoyed the companionship of his many cousins, swimming in the canals, fishing in the irrigation ponds and hunting wild rabbits. When Dee was five years old, he developed pneumonia. He had back surgery to remove part of his lung and was put in an oxygen tent for a time. He was blessed by his uncle, LaMar Holt, who told him he would live to fulfill a mission for The Church of Jesus Christ of Latter-day Saints. Dee graduated from Davis High School and LDS Seminary in 1950. He attended Weber State College and BYU for two years and then his family moved to Sacramento, California, where by divine design his uncle LaMar Holt was the bishop of their ward and who, fulfilling prophecy, called him on a mission. He fulfilled a mission to the Northern States Mission where he was instrumental in creating visual aids for proselytizing purposes in that mission and was greatly valued by his mission president not only for his art ability but for his “lovely disposition and great desire to fulfill every assignment given him.” That mission at that time included Iowa and Illinois. Upon his return, he attended Sacramento State College where he received his bachelor’s degree. It was at an M-Men & Gleaner stake fireside where he met a girl from South Africa, Janet Sparks. They corresponded for a year while Janet concluded her second year at BYU and were married on August 23, 1960 in the Los Angeles Temple. For several years Dee taught Art, English and Social Studies in both junior and high school levels in the Los Angeles area where their two daughters, Sherri and LeeAnn, were born. At that time also, Dee served in the Air National Guard as an administrative clerk. He transferred thereafter to Utah and in all put in six years with the National Guard. After their move to Utah, he taught Art at Granite High School while working as a sign painter for Schmidt Signs during his summers. Upon the adoption of an energetic baby boy, they decided to move to Fairview, Utah, where they farmed 15 acres, raised sheep and chickens and a few calves and Dee taught junior high for a while and then worked for Snow College as their printer; he later went into the printing business for himself. After the children left home, the business was sold and they returned to Salt Lake City. Always faithful in his Church duties, Dee was called to many leadership positions in the various wards they lived in. Because of his sign painting ability, Dee and Janet were called to the Nauvoo Mission from 2001 to 2003 when the Nauvoo Temple was dedicated. His artistic and theatrical skills were used in multiple ways and in multiple areas in Nauvoo and together they fulfilled a never-to-be-forgotten mission. We will dearly miss his theatrics, his great sense of humor and his devotion to his faith and family but know he has reunited with his beloved family and is happy. Dee is survived by his beloved wife, Janet, and his three children: Sherri Dee Bohne (Cleve), Janet LeeAnn Moffett (James) and David Scott Gwilliam and his brother, Henry Arthur Gwilliam, nine amazing grandchildren and five of the most adorable great grandchildren. Dee was preceded in death by his parents, his two brothers, Keith and Robert, and his sister, Shirley. Funeral services will be held Saturday, October 21, at 11:00 with a viewing at 10:00 at the LDS Meetinghouse, 6300 South 300 East, Murray. The family wishes to express their deep appreciation for the team at Brighton Hospice and in particular his nurse, Scott Foster, and aide, Mikey. Online condolences can be posted at www.premierfuneral.com.

DEE HOLT GWILLIAM Dee Holt Gwilliam passed away on October 13, 2017 at the age of 85. He was born on August 3, 1932 in Ogden, Utah to Bessie Holt and Henry Ernest Gwilliam. He was the fourth of five children. Dee grew up in West Point, Utah,... View Obituary & Service Information

The family of Dee Holt Gwilliam created this Life Tributes page to make it easy to share your memories.