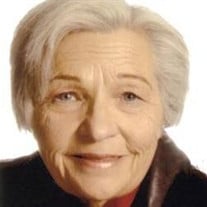 DeLanna Pollard McBride 1934-2020 DeLanna (Dee) passed away January 9, 2020, at her home in Murray, Utah. She was born March 27, 1934, in Bingham, Utah. She was the oldest of Clarence Edwin and Alta Walker Pollard’s seven children. Services will be held Saturday, January 18, 2020, at Murray 15th Ward: 5555 South 700 West, Murray, Utah. Viewing at 9:45 am, service at 11 am. Graveside service at Elysian Gardens 1075 East 4580 South, Salt Lake City, Utah. Dee is survived by her son, Lloyd, daughter Tammy, five grandchildren, ten great- grandchildren and brother, Mel. She is preceded in death by her father Clarence, mother Alta, sons Ron and Don, brother, Clarence and sister, Carolyn. Her family lived in the Bingham/Copperton area until she was six and then moved to Salt Lake. She attended Hawthorne Elementary, Lincoln and Irving Junior High, graduated from East High School and obtained a Business Administration degree from LDS Business School. She was a single mother of four children (Ron, Don, Lloyd and Tammy) at a time when it was a challenge for women to be in the workforce. She created a career, which was varied and successful including sales, purchasing, recruiting and several business ventures. Growing up, she learned to play the piano and would perform at ward houses, playing piano while her brother Clarence sang. With her sister Carolyn, she would spend hours “playing” library having organized the books, creating a check-out system. Although she didn’t continue to organize them, she read hundreds of books over the years including novels, historical works and political books. Politically she stayed very informed and wouldn’t hesitate to prove why you were wrong if you had a different opinion. Travel was a huge part of her life. The most special adventure was her year sailing around the world on the Yankee Trader. A lot of the time was spent on the sea, but she was able to visit exotic ports like Papua New Guinea, and Easter and Pitcairn Islands. She went around the world several more times traveling overland, on the Queen Elizabeth, on Freighters and other sailing ships. Closer to home she loved going to Lake Powell. If she wasn’t traveling or working, she kept very busy with shopping, plays, symphonies, Story Telling Festival, a movie almost every weekend and spending time with her grandkids. She was active in the LDS church holding several callings. Her faith was very important to her and she loved the members of the ward and neighborhood. She was a strong lady who led a fearless life, looked up to by many and maybe feared by some! You always knew where you stood with her and it was hard to always be on the positive side of that. She expected a lot from people because she expected so much from herself. The last few years and particularly the last few months were very difficult for her. She needed to go out the same way she lived. Now she is at peace and will be enjoying clear skies and smooth sailing for eternity. Or, knowing her spirit, she will likely be “sailing close to the wind.” Funeral services 11:00 am, Saturday, January 18, 2020 at The Church of Jesus Christ of Latter-day Saints chapel at 555 South 700 West, Murray, Utah where a viewing will be one hour prior to services. Interment in the Elysian Burial Gardens Cemetery.

The family of Dee DeLanna Gay Pollard McBride created this Life Tributes page to make it easy to share your memories.