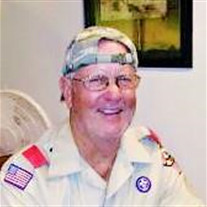 Dennis Anthony Beitler 1943- 2018 Dennis, also known as “Denny”, age 75, passed away peacefully on Monday, August 13, 2018 at home in Cottonwood Heights, Utah. Denny was born March 22, 1943 in Los Angeles, California to Agnas Pratt and Henry Harry Beitler. He attended and graduated from John Marshal High School in California, where he met his future wife Pamela Sue Pederson. Denny enlisted in the Army of the United States in 1961 and served honorably until he was discharged in 1968. During that time Denny married Pamela Sue in 1967. Together they had three children, all whom survive their father: Shelley Jo Elhaddi (Adam), Brett Alan Beitler (Jamie Michelle), Holly Denise Kastner (Haven). Also surviving are six grandchildren, Colton Beitler, Ashlynn Beitler, Bradley Beitler, Brenden Beitler, Kendall Kastner, Kali Kastner, and one great granddaughter, Aleah Raine Casity. As a member of the Church of Jesus Christ of Latter-day Saints, Denny’s heart is with the young men and the Scouting Program. Denny was honored with a distinguished service award, The Silver Beaver from the Boy Scouts of America, which made an impact on the lives of the youth. Denny served with exceptional character, performing community service through hard work, self-sacrifice, dedication and 50 years in scouting. Denny has touched so many lives. He is considered to be quick witted and a very kind hearted man. He retired from the City of Los Angeles and Salt Lake County as a Civil Engineer. Denny’s passions are camping, fishing, boating, hiking, being in the great outdoors, cars, dogs, shooting pool and his favorite… Dr Pepper. Dennis is a positive person and gave a helping hand to many people in his life. He will be watching over us all. Till we meet again. A viewing will be held at 10:00 am, Monday, August 20, 2018 at the Butler Stake Center, 7035 S. Nutree Drive, Cottonwood Heights, Utah, with the funeral service to begin at 12 noon. Interment to follow at Memorial Holladay Cemetery, 4900 S. Memory Ln. Holladay, Utah.

The family of Dennis Anthony Beitler created this Life Tributes page to make it easy to share your memories.