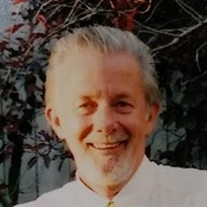 Dennis Raymond Davies, 78, passed away peacefully the morning of 31 Aug 2019 after a long struggle with dementia. Dennis was born in Logan, Ut on 23 Sept 1940 to Raymond Crockett and Grace Spongberg. He was later adopted by Irvin Louis Davies. He grew up in Salt Lake City Sugarhouse area. He achieved his Eagle Scout at age 15. He graduated from South High School in June 1958. He joined the Navy and served his country from Aug. 1958 to 1961 as a maintenance engineer on the USS Gregory. Dennis attended the University of Utah graduating with his BS Degree in Business in 1966. He was Delta Sigma Pi member and a Utes forever fan. He married Joan Marie Wadman on 7 Aug. 1977 and they were later divorced. Dennis resided in Roy, Sunset, Layton, West Point and Ogden area. He raised two children, Ryan Lee and Marie Tara. Dennis managed Goodyear Tire and Service for many years retiring in 2002. He loved to collect coins, dabble in dollar stocks and play with grandkids. You could always count on Dennis for a helping hand. He was a parent, grandparent, nanny, taxi service, friend and there if you needed him. He spent many of his last days with his daughter and her family making forever memories. Dennis was preceded in death by his parents, survived by sisters, Patricia (Stan) Lawrence, Diane Crockett, Linda Daniels, Judy Crockett, brother, Larry Crockett; children, Ryan (Laura) Davies, Marie (Ryan) Steed and 7 grandchildren. A short viewing will be held at the gravesite at 10 AM Friday, Sept 6 followed by Graveside services at 11 AM. Internment in Salt Lake City Cemetery , 200 N. St E., Salt Lake City, Ut. Friends and family are invited to meet for luncheon in Ogden at his daughter Marie’s after the service. His family would like to thank Hidden Valley Assisted Living and Canyon Hospice for the care and concern the family was shown during this difficult time.

Dennis Raymond Davies, 78, passed away peacefully the morning of 31 Aug 2019 after a long struggle with dementia. Dennis was born in Logan, Ut on 23 Sept 1940 to Raymond Crockett and Grace Spongberg. He was later adopted by Irvin Louis... View Obituary & Service Information

The family of Dennis Raymond Davies created this Life Tributes page to make it easy to share your memories.