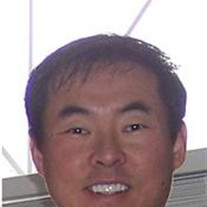 Dennis Gwak (Kwak), our husband, father, brother, and friend passed away after a long and painful battle with cancer on October 12, 2011. He was born October 6, 1963 in a small country town called Oakchun in the Choong Chung Providence in South Korea. His arrival was a great joy for the whole Kwak family. He is the oldest of 4 children. As a little boy he liked to ride a tricycle with his sister riding on the back. His parents moved to Seoul before he turned 10. When he was a teenager he liked to read world literature books. He also liked to go to the electric open market in Seoul to buy small parts and put them together to make various remote control operated toys like armed vehicles and planes. His room was filled with many of his complicated electronic gadgets. He also enjoyed listening to 70’s and 80’s pop songs and he liked to play the guitar. Wanting to practice English Dennis went to an English class offered by LDS missionaries. He was baptized and became a latter day saint at the age of 16. He was very good at English so he often helped people as a translator and he was definitely the favorite person among the American Missionaries. He was an excellent student growing up and he made his parents proud of him by being accepted to one of the most prestigious universities in Korea, Korea University. As a young man he served an LDS mission in Bussan, Korea becoming an assistant to the mission president. He was a great singer and he often attended church activities. After his mission people loved having him teach Sunday School because he had a strong faith in God and a broad understanding of the gospel. He gave inspirational lessons. He moved to the United States shortly after his mission to study at BYU Hawaii where he met his first wife who died two months after they were married. He later transferred to BYU in Provo where he met Laurel and together they had 3 wonderful sons. He earned a bachelor’s degree in Social Work with a master’s degree in business. He had lots of ups and downs in his life but he always enjoyed being a dad. During his life he was able to run 2 of his own businesses providing jobs for many people. One was a mortgage company and the other was a sign company. After he was diagnosed with liver cancer a little over a year ago, he sought out the best way to help his family even though he was in so much pain. He believed that God had a purpose for him and he became so brave and faithful throughout the whole time he was getting ready for eternity. He was well prepared to be with God again. He was so proud of his three boys and they made him so happy. He loved to fish, tinker with electronic gadgets. He was a gifted man with a sensitive heart and refined taste. He will be greatly missed. Dennis is survived by his wife, Laurel; children, Aaron; Ryan; Brandon; father, Yong Kwak; siblings, Sanghee (John) Dahlman; Sunhee (Dong-Joo) Park; Sangchul (Minhe) Kwak. He was preceded in death by his mother, Kyung Rye Kim and his first wife Ginger. A viewing will take place Sunday, October 16 from 6:00-8:00 pm and again on Monday October 17 from 10:00-10:45 am at the LDS church, 1988 W 11400 S, South Jordan, Utah, 84095. Funeral Services will begin at 11 following the Monday morning viewing. Dennis will be laid to rest at the South Jordan City Cemetery. Donations to the family can be made at any US Bank.

Dennis Gwak (Kwak), our husband, father, brother, and friend passed away after a long and painful battle with cancer on October 12, 2011. He was born October 6, 1963 in a small country town called Oakchun in the Choong Chung Providence... View Obituary & Service Information

The family of Dennis Song Gwak created this Life Tributes page to make it easy to share your memories.