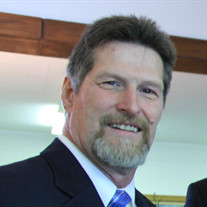 Dennis Earl Ingles, 65, passed away following a motorcycle accident on Saturday, September 2, 2017 in Bountiful, Utah. Dennis was born on April 26, 1952 in Salt Lake, Utah, as the fourth of five children and was a lifelong resident of Bountiful, Utah. He was a Bountiful Junior High and Bountiful High graduate, played in the marching band, and worked with his parents for years at their music store in Bountiful. He played guitar and saxophone, and loved music. He was an expertly skilled handyman, working with carpentry, electrical, plumbing, and HVAC systems. He served a full-time LDS mission to Washington State. He was married in the Salt Lake Temple on November 3, 1978 and later divorced. He was immensely proud of his Scottish heritage, passionately involved in family history, and carried on a tradition of record keeping for the family. He was an active member of the Church of Jesus Christ of Latter-day Saints, and was a loving father, son, grandfather, and brother. He cared for his aging mother in her later years, and his thoughts were always on his family, as shown by his dedication in making gifts, providing treats, and giving hugs to his beloved grandchildren. He is survived by his children; Nathanael (Maren), Joshua (Dallas), Isaac, and Heidi (Josh), eight grandchildren; Taylor, Deakin, Holden, Scotlyn, Sammy, Carson, Grayson, and Claire, and siblings; Carolyn, Jim (Sandy), Glen, and MaryAnn (Rick). He is preceded in death by his father, John Earl Ingles, and his mother, Helen Mace Waddell. Services will be held at the LDS Meetinghouse located at 55 East 350 North in North Salt Lake, Utah on Saturday, September 9, 2017 at 11:00am. A closed casket visitation with the family will precede the funeral service beginning at 10:00am. Interment will follow at Memorial Lakeview Cemetery in Bountiful, Utah.

Dennis Earl Ingles, 65, passed away following a motorcycle accident on Saturday, September 2, 2017 in Bountiful, Utah. Dennis was born on April 26, 1952 in Salt Lake, Utah, as the fourth of five children and was a lifelong resident of Bountiful,... View Obituary & Service Information

The family of Dennis Earl Ingles created this Life Tributes page to make it easy to share your memories.