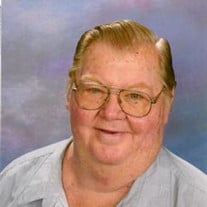 Sept. 1, 1948 - July 10, 2015 It is with deep sadness that we announce the passing of a mighty man. Dennis James was the biggest, strongest, kindest and most genuine man you could come across in this world. Anyone who met Dennis knew him to be compassionate and endlessly giving of himself and his time. He was always ready to drop everything to help out a family member, a friend or even a stranger. Dennis was a faithful member of the Church of Jesus Christ of Latter-Day Saints. He was a member of the Washington Terrace 6th Ward. He taught in the Priesthood, in Primary, Nursery an in the Elders' Quorum. Dennis was a veteran of the Vietnam war. He risked his life (and on more than one occasion he very nearly gave it) in service of his country. During the war he saw many horrors and he lost many close friends. He carried the pain of this through the rest of his days, but he never let it drag him down. His kindness and his love were stronger. His smile was too big and bright to be defeated. Dennis is preceded in death by his parents, Joseph and Verda James. He is survived by his wife, LaRue, his siblings Darla and Merlin and his daughters, Connie (Kim) Miller, Cindy (Lee) Bair, Casey Loomis and Cherie (Travis) Krusell. He is also survived by eleven grandchildren (Krista, Anna, Alex, Jacob, Kelsey, Jackson, Isaac, Riley, Abrie, Dustin and Kayla) and 10 great-grandchildren. In his final weeks, when the reality of his decline set in, Dennis was the brightest beacon of light in the sea of grief. He encouraged all of us to see this not as goodbye but rather as the briefest of separations. We can hold his frequent words in our hearts and take comfort in them. "Keep a smile on your face and a song in your heart, Bye for now, babe." "A graveside service and military honors will be performed at 10:00 a.m. on Friday, July 17th at the Ogden Cemetery on 20th Street."

Sept. 1, 1948 - July 10, 2015 It is with deep sadness that we announce the passing of a mighty man. Dennis James was the biggest, strongest, kindest and most genuine man you could come across in this world. Anyone who met Dennis knew... View Obituary & Service Information

The family of Dennis James created this Life Tributes page to make it easy to share your memories.