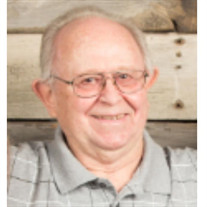 Dennis (Denny) W. Lowe, of West Valley City, Utah passed away on February 11, 2019. He was born on April 4, 1941 in Salt Lake City, Utah, to the late Marjorie Oliver and the late Martin Winn. Dennis married the love of his life, Linda Lowe, on March 18, 1966 in Las Vegas. He was in the Communications industry retiring from Lucent Technologies in 2000. He was preceded in death by his brother, Leonard Winn (Zeta). Dennis is survived by his loving wife, Linda; daughter, Nicole Green (Judd); son, Derek Lowe (Kathryn); Step Mother Jeanne Winn; siblings Patti Brown (Don), Linda Myers, Jesse Lowe (Lisa), Layne Oliver (Teri), Tanya Talbot (Randy), Elaine Strong (John), Jim Winn (Denise) and Cheryl Shaffer (Gene); and grandchildren, Nicholas Erickson, Jessica Lowe, Maddyson Green, and Cooper Green. In his younger years Denny played in bands throughout the Salt Lake Valley. He was very talented, able to expertly play the accordion, any guitar, whether it be electric or acoustic, organ and harmonica. In Denny’s later years he continued to play the same instruments for his family and friends. Denny was well known as a dad to all that crossed his path. He was a troublemaker from a young age, which definitely rubbed off on his children! He loved to scare his wife on hill climbs in their truck and taking his family camping and fishing all summer long. Denny and Linda took their children on many adventures throughout their childhood and beyond, creating memories that will last a lifetime. His favorite holiday by far was Christmas. We all made sure to be at either mom and dad’s home or our close neighbors, Steve and Bilene Chubbuck, on Christmas Eve. Denny is famous for making everyone sing rounds of Jack O’ Diamonds whether you could hold a tune or not. Derek and Nicole both learned to drive a stick shift truck in the mountains at a young age. Many of times they would take the truck and drive together, chasing sheep and yelling at them through the CB. They would get back to camp and find their dad standing there with a rum and coke laughing, asking them if the sheep ever moved. We have so many stories we could share if only there was enough time and space to write the book it would take to hold them. We love you forever, your loving wife, children and extended family! Celebration of Life service will be at the LDS church located at 3751 S. 2200 W., West Valley, UT 84119 from 11:00am – 1:00pm this Saturday February 16th, 2019.

Dennis (Denny) W. Lowe, of West Valley City, Utah passed away on February 11, 2019. He was born on April 4, 1941 in Salt Lake City, Utah, to the late Marjorie Oliver and the late Martin Winn. Dennis married the love of his life, Linda Lowe,... View Obituary & Service Information

The family of Dennis W Lowe created this Life Tributes page to make it easy to share your memories.