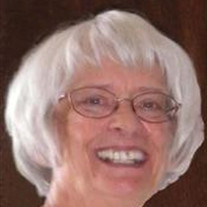 Diana Margaret Martin Cranney, 76, our beloved mother and friend, passed away peacefully in her home on November 14, 2013, from natural causes. Diana was born September 2, 1937 into an extended Swedish immigrant family in St. Paul, MN to William (Rollo) Martin and Sigrid Freeman Holt. Diana loved classical music, theater, her sweet friends, and especially her 19 grandchildren and 1 great grandchild. Diana spent her childhood and teenage years in Tacoma, WA, climbing trees and riding bikes with her sisters and friends. While a student at Lincoln High School, she began attending the old Tacoma 2nd Ward where she was nurtured and loved, earning youth awards and even served in callings. She was baptized a member of the LDS church the day after her 18th birthday. After working for a year she attended BYU and graduated with a degree in education. While at BYU, Diana met A. Garr Cranney, and they were sealed in the Logan Temple in 1961. Over the years, Diana faithfully raised her family in Minneapolis, MN, Gainesville, FL, and Provo, UT. After her own children were grown, Diana continued in her nurturing ways and taught kindergarten for over 20 years in Provo at Joaquin and Maeser Elementary schools, where she was awarded the Golden Apple Outstanding Educator of the Year award multiple times. After she retired from teaching, she continued her service to others as a full-time missionary for the LDS church in Tucson, Arizona. Diana also faithfully served in the church her entire life in many callings and also served many mothers and babies as a La Leche League leader. Diana especially enjoyed doing family history work, where she researched and served many generations of her deceased Swedish line. Diana will be remembered as a person who had a pure heart, loved others and followed the Savior. Mom loved the Gospel of Jesus Christ. Diana laughed a lot and she was often found saying sweet things like, “Oh, for cute!”, “precious”, and “honey” to everyone she met. The legacy of her family she leaves behind are her two sisters, Annette (Stuart) Peterson and Deborah (Ronald) Seitz; daughters Sharon (Scott) Fletcher; Susan (Josh) Yamada; her sons Garr III, Kendall (Dena), Kevin (Karsen) and Daniel (Kristen). She is preceded in death by her parents, her husband and her infant son David. Funeral services will be held Tuesday, November 19, 2013. Viewing will be from 8:00AM – 9:45AM and service will begin at 10AM at the LDS Chapel, 555 East 3230 North, Provo, UT. Interment will be at the Logan City Cemetery.

Diana Margaret Martin Cranney, 76, our beloved mother and friend, passed away peacefully in her home on November 14, 2013, from natural causes. Diana was born September 2, 1937 into an extended Swedish immigrant family in St. Paul, MN to William... View Obituary & Service Information

The family of Diana M Cranney created this Life Tributes page to make it easy to share your memories.