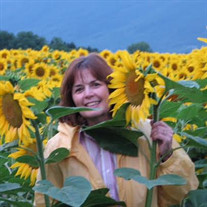 Diana Christine Petersen Edmunds 1943 - 2018 Diana was born in Los Angeles, California and grew up in Southern California. Her father was a member of the Church of Jesus Christ of Latter-Day Saints although not active. Diana and her brother Dale attended several different churches with neighbors as they were growing up. When Diana was 9, her father decided it was important for his family to attend church together and asked the missionaries from the LDS Church to begin teaching him and his family. The lessons that Diana learned in those early years laid a foundation of faithfulness that she followed the remainder of her life. During her freshman year in high school, Diana met her sweetheart Nolan. Diana often told the story of one of their dates when they got back to her home a little later than planned. They were met at the door by her rather upset father who informed Nolan that he was no longer allowed to date his daughter. Thankfully, Nolan and Diana figured it out. While claiming that she wasn’t “officially waiting” for Nolan, Diana regularly wrote Nolan throughout his mission. When he returned home, they began dating again and were married for time and all eternity in the Los Angeles Temple in September of 1962. In August of the following year they welcomed the first of their seven children to their home. Diana’s joy was her family and while Nolan was completing his degree at Brigham Young University, she focused on building their family. Before they left BYU a second child had joined the family and a third child was on the way. When the twins arrived, there were 5 children under the age of 5. Some might have felt overwhelmed with that but Diana often exclaimed “I’m the luckiest mother in the world!!” Sadly, one of the twins Matthew, passed at the age of three. Diana often spoke of him and genuinely anticipated their reunion. The first of many moves was from BYU to Bartlesville, Oklahoma. Nolan’s career took the family to the Chicago area three times, Baton Rouge, San Diego, and West Texas. There was even a two-year period where the family was part of the International Mission of the LDS church while they lived in Algeria, North Africa. As the only members in the country, church meetings were faithfully held each Sunday in the family living room. Diana and Nolan team-taught their young family the gospel as well as home schooling each of their children. This was a special time for the family as they learned to support and rely on each other. Diana was creatively gifted. She enjoyed painting portraits and landscapes in oils. She also created different types of ceramics including porcelain dolls that she made, showed and won ribbons with those she entered. She loved plants and growing different types of flowers. Orchids and roses were her favorites. She had a green thumb and could get just about anything to grow. Diana was never scared of tackling any project around the home. She took great joy in beautifying their home and was often found working on something to bring just that little extra touch of warmth and beauty wherever they were living. She was also a gifted seamstress. Many of her own dresses and the dresses of her daughters were ones she created, including prom and wedding dresses for them. One wedding dress was made using sketches of a dress her daughter had tried on. She loved animals and her children remember always having family pets. These pets included all different types of creatures; turtles, fish, Guinea pigs, parakeets, French lop rabbits and a few dogs. She had her favorites and her beloved golden retriever “Lissa” was at the top of the list. Diana served in many different callings in the church. She loved serving others and spread her light to others as she served. One of her favorite callings was as an Early Morning Seminary teacher for 4 years in the Chicago area. Each morning she invited sleepy teenagers to join her in her living room as she taught the gospel. She had a special impact on those teenagers and there was a special spirit that could be felt in the home. She was also blessed to serve a Full-Time missionary with her husband based in Geneva Switzerland as well as a two-year service mission with the Mormon Tabernacle Choir. She also served in the Payson Temple and loved doing family history. One of her children’s most cherished gifts are the family history books she did one Christmas for each of them. She is survived by her sweetheart and husband of 55 years, Nolan Jensen Edmunds and 6 of her seven children, Kent (Brenda) Edmunds, Chantalle (Bill Bowes) Edmunds, Mark (Lori) Edmunds, Paul (Teresa) Edmunds, Juli (Paul) Osmun, and Robyn (Aaron) Popham; her 30 grandchildren and 5 great-grandchildren; and her siblings, Dale (Donna) Petersen, Adrienne (Bob Patterson) Petersen, and Leslie (Richard) Moseley and many nieces and nephews. Diana is preceded in death by her son, Matthew, and her parents, Joseph and Christina Petersen. She leaves behind a legacy of faithful service to those around her. Her love and devotion to her Savior and commitment to gospel principles will forever be an example to those whose life she touched and more particularly her family. She always was quick with a kind word and her “signature” smile. That sweet smile was with her even through the difficult last years of her life as she endured the challenges of Alzheimer’s. She passed from this life peacefully in her home surrounded by her family. Words cannot express the blessings Diana brought to her family. Her life can be summed up by her children, borrowing a quote from Abraham Lincoln, “All that I am or hope to be I owe to my Angel Mother.” In lieu of flowers the family requests that donations be made in her name to Dr John S.K. Kauwe’s research on Alzheimer’s. Donations can be made at using this link. http://bit.ly/2EUBzl0

Diana Christine Petersen Edmunds 1943 - 2018 Diana was born in Los Angeles, California and grew up in Southern California. Her father was a member of the Church of Jesus Christ of Latter-Day Saints although not active. Diana and her brother... View Obituary & Service Information

The family of Diana Christine Petersen Edmunds created this Life Tributes page to make it easy to share your memories.