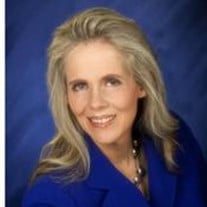 Diana Evelyne Lofgran Hoffman, age 50, passed away peacefully on April 13, 2013, surrounded by family after a long struggle with cancer. Diana was born October 24, 1962 in Chicago, Illinois, and grew up in Lost River Valley, Idaho. Diana was an exceptional student, and in her senior year of high school, she represented the state of Idaho in Washington D.C. as a National Merit Scholar. She attended BYU, where she received a degree in Graphic Arts in 1986, and later received a Master’s degree in professional counseling in 2002. Diana then opened a counseling center in Salem, Utah, through which she blessed the lives of many. She also hosted a radio show, Healing Talk Radio, which focused on improving emotional well-being and family relationships. Diana married her sweetheart, Curtis Brent Hoffman, on May 5, 1984 in the Salt Lake LDS Temple. She and her family subsequently lived in Cupertino, California before moving to Spanish Fork, Utah and then Woodland Hills, Utah. Together, Diana and Curtis raised four children who survive her: Christina (Adam) Clark, Stephen (Lisa) and Daniel Hoffman, and Jessica (Stuart) Himmer, as well as one grandchild: Lily Diana Clark. She is also survived by her husband Curtis; her mother, Evelyne (Reed) Nielsen; and her brothers, Randy (Tiffany), Scott (Kimberly) and Reid (Danielle) Lofgran. She was preceded in death by her father Wayne C. Lofgran. Diana was a member of the Church of Jesus Christ of Latter-day Saints, and possessed an unwavering testimony of her savior, Jesus Christ. The creations of the Lord were a fascination to Diana, which she loved to explore through backpacking, white-water rafting, skiing, and other outdoor activities. The wisdom, kindness, and love she so freely shared will be greatly missed. Funeral services will be held at 11:00 am on Saturday, April 20, 2013 at the Mount Loafer LDS chapel at 1129 South 250 West in Salem, Utah. A viewing will be held from 9:30 – 10:45 am prior to the funeral. To read more about Diana’s life or to share memories of Diana, please visit www.dianahoffman.com. Interment in the Santaquin Cemetery.

The family of Diana Evelyne Hoffman created this Life Tributes page to make it easy to share your memories.