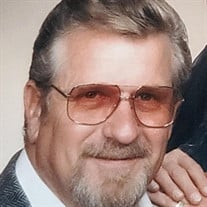 Dick A. Gayler Jr. Beloved husband, father, grandfather, and uncle passed away peacefully at home with his loving wife by his side on Wednesday August 4, 2021. Dick was born October 19, 1937 to Dick A. Gayler and Martha Barger in Salt Lake City, UT. Dick attended South High School in Salt Lake City. Dick was a proud US Navy Veteran and served on the USS Hornet during the 1950’s. Dick was married to and later divorced from the late Cozette Rogers. Dick then married the love of his life Danna Lynn Baldwin in 1975. Dick is survived by his wife, 4 children, Steven Ray Gayler, Stacie Gayler, Carrie Gayler (Rachael Smith), Gail McPhie (Michael), 7 grandchildren and 5 great-grandchildren. He is preceded in death by his daughter Crystal Smith (Gregory), his parents Dick and Martha Gayler, his siblings; Betty Myers, Harry Gayler, Geraldine Gayler, Gerald Gayler, Donald Gayler, and Carol Chapman. Dick enjoyed a long career at Cummins Diesel and retired in 2000. He enjoyed camping, woodworking, painting, and was an avid golfer. He was considered a jack of all trades. He kept a meticulous workshop that he was very proud of. There wasn’t anything Dick couldn’t do. He especially loved spending time with his family and friends, and he could often be found playing games and cards with them. Dick loved playing his harmonica and loved old school country music. Dick was known to have a great sense of humor and was the life of the party. He was loved by so many and will be greatly missed. After he and Danna retired, they spent every winter in their RV in Yuma Arizona. They met many friends with whom they enjoyed long-term friendships. The viewing will be held on Tuesday August 10th from 6-8 pm at Premier Funeral, 67 East 8000 South Midvale, UT 84047. Services will be held Wednesday August 11th at noon with the viewing prior 11-12. Graveside services will be at 1 pm at Redwood Mortuary 6500 Redwood Rd, Taylorsville UT 84123. Please wear a mask due to the new COVID-19 Delta variant outbreak.

Dick A. Gayler Jr. Beloved husband, father, grandfather, and uncle passed away peacefully at home with his loving wife by his side on Wednesday August 4, 2021. Dick was born October 19, 1937 to Dick A. Gayler and Martha Barger in Salt Lake... View Obituary & Service Information

The family of Dick Gayler Jr created this Life Tributes page to make it easy to share your memories.