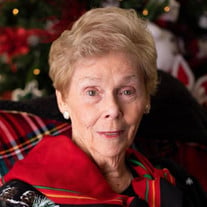 Our beloved mother, grandmother, and great-grandmother Dixina Price Jarman passed away peacefully on March 17, 2022 attended by representatives of her children and grandchildren. Dixina was born on June 20, 1938 in Washington, DC where she lived with her mother and father until the end of WWII. She often recounted her memory of going to the National Mall and watching as the monument and Capitol lights were turned back on after years of black-out. When Dixina was seven years old she moved to her father’s native Phoenix, Arizona and lived there until college. She attended both the University of Arizona and Brigham Young University, graduating from the latter in Elementary Education. While at BYU, Dixina met and married Charles D. Jarman. She worked as an elementary school teacher while Charles finished his education and afterward, settled into her real career: providing an amazing home and upbringing for her four children. She and Charles returned with their family to Arizona in the late 1960’s and lived there for most of the remainder of their lives. She served with equal diligence in quiet, personal service to others and in leadership positions in the stake and ward Relief Society, Young Women, and Primary organizations of the Church of Jesus Christ of Latterday Saints. With Charles she completed three church missions serving on Temple Square, at the MTC in Preston, England, and as a “red-badge” hostess for events at the Conference Center. Our dad lovingly called her “Dippy” knowing full well that she was anything but. Our mother could literally do anything. She was a beautiful and gracious woman who could make anyone feel important, a dynamo of energy and organization who could tame any task, from serving dinner for hundreds at Relief Society events to scheduling all the tours on Temple Square in Salt Lake City to acting as team-mom for five Little League and church ball teams at once. She excelled at everything she tried, including growing her own business from a small, in-home craft sale to one of the largest seasonal Christmas boutiques in Arizona. Most importantly, she took all her talent, energy, and commitment and channeled it into her family members whom she always loved “a bushel and a peck.” Dixina is survived by her daughter Suzanne (Richard) Reese; sons Dix (Kaleen) Jarman, Blake (Debbie) Jarman, and Brett (Nanci) Jarman; seventeen grandchildren and four great grandchildren, as well as her sister Susan Swapp and brother David Price. A viewing will be held for Dixina on Thursday, March 24 from 6:00-8:00pm and again on Friday, March 25 from 9:30-10:30am with a funeral service to follow at 11:00am. All services will be held at the LDS chapel located at 1106 East Old Dairy Road, Sandy, Utah. Interment to follow at Sandy City Cemetery, 700 East 9000 South. Arrangements are under the direction of Premier Funeral Services and a zoom link for the service is available https://us02web.zoom.us/j/87118513769

Our beloved mother, grandmother, and great-grandmother Dixina Price Jarman passed away peacefully on March 17, 2022 attended by representatives of her children and grandchildren. Dixina was born on June 20, 1938 in Washington, DC where she lived... View Obituary & Service Information

The family of Dixina Price Jarman created this Life Tributes page to make it easy to share your memories.