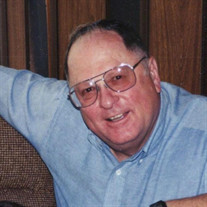 Don Chatterton Burbank passed away peacefully on Friday, July 31, 2020 after a valiant battle with cancer. Don was born in Mapleton, ID on September 11, 1937 to George G. Burbank and Violet Chatterton Burbank. He graduated from Preston High School in Preston, ID. After high school he served a mission for the Church of Jesus Christ of Latter Day Saint in the Southwest Indian mission, serving in Arizona. Don was drafted into the Army during the Vietnam War where he served as a medic for two years. After the war, Don married Connie Rembert and they had two sons, Mark Burbank and Wayne Burbank. They later divorced. On June 29th, 1990 Don married the love of his life Judy Wheeler Clarke in the Ogden Temple. Together they were called on a mission for the Church of Jesus Christ of Latter Day Saints to the Navajo’s in the same area where he served as a young missionary. He served the Lord faithfully in many church callings. Don and Judy served for several years in the Ogden Temple up until the cancer made it too difficult. Don completed his Master’s Degree from Utah State University in Educational Administration. He taught school for three years and served as principal until 1990. After leaving education he worked for the IRS as a Criminal Investigator where he retired in 2005. After retirement he tended his garden, worked in his workshop where his grandson Trevor showed him how to turn wooden pens on his Lathe. He supported his family in their quilting habits by crafting a large cutting table with shelves and cupboards, large sewing table and numerous ladders for displaying quilts. Don also loved spending countless hours with his son, Wayne riding motorcycles to unknown destinations. Baking bread was a great love. He was always trying to perfect his recipe. There was always warm bread and other goodies to eat. Many have benefited from this gift. Don was a master story teller. Anyone near him would be laughing and entertained for hours. Along with his big personality, he gave the biggest hugs. He never let anyone leave without a giant hug and being reminded of how much we are loved. We are blessed to have such a wonderful example of Christ like love. Don’s testimony was shown in how he lived his life. Wayne described his dad as being the most loving person on the on the planet. Don is survived by his wife Judy Burbank. His Children, Colleen Clarke (Teresa Perkins), Kim (Steve) Olsen, Wendy (Brian) Wallace, Mike (Michelle) Clarke, Kristy (George) Burrell, Mark (Christie) Burbank, Wayne Burbank, his daughter-in-law Nancy Clarke. His sisters, Mada Scott and Grace Castle. He also survived by 24 grandchildren and 18 great-grandchildren. Don was preceded in death by his parents, his Sister Lera Hansen, and son Tom Clarke III. A viewing will be held on Wednesday, August 5th, 2020 at the LDS building at 3290 W. 800 N., West Point from 9:00am – 10:00am. A graveside service will be held at West Point City Cemetery following the viewing. *We are living during a difficult time and we would like to be respectful of social distancing guidelines. Please be mindful of masks, limit contact and feel free to bring a chair at the cemetery if desired.

Don Chatterton Burbank passed away peacefully on Friday, July 31, 2020 after a valiant battle with cancer. Don was born in Mapleton, ID on September 11, 1937 to George G. Burbank and Violet Chatterton Burbank. He graduated from Preston High... View Obituary & Service Information

The family of Don Chatterton Burbank created this Life Tributes page to make it easy to share your memories.