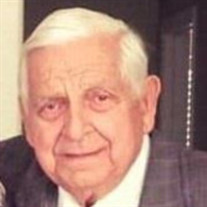 Don Terry Malan passed away on Monday, November 2 at 11:15pm at his home in Pleasant View, Utah. He was born on April 23, 1932 in Ogden, Utah to Parley Quince and Susan Delia Terry Malan. He spent his childhood and teenage years in Utah and Montana with his best friend and nephew, Barr Edward. They shared many great adventures on the Edward Ranch in Sumatra, Montana. He graduated from Ogden High School in 1950, was active in the Air Force ROTC and later joined the US Air Force serving as a Radio Technician. After an honorable discharge, Don continued to serve his country as a civilian employee of the Air Force. He attended Weber State College and the University of Utah. Don married the love of his life, Jeanene Johnson, on November 14, 1952. Their marriage was later solemnized in the Salt Lake Temple. They made their home in Layton, Utah, where they had a small mink ranch. Don worked as a civilian USAF employee at HAFB and Boeing in Washington State on various ICBM production boards. They returned to Utah in 1970 and lived in Morgan, Utah, Pleasant View Utah and Las Vegas, Nevada. Don’s passion was cars. He was a true mechanic at heart, able to fix anything with a motor. Many family and friends have driven cars that he rebuilt. Don was a lifelong member of the Church of Jesus Chris of Latter-day Saints and served the Church in many callings, with his favorites being missionary service. He and Jeanene served a mission in the Oakland, CA Mission. Don is survived by his wife, Jeanene, daughter Deborah (Blake) Johansen, son Chris (Laurie) Malan, son-in-law Fritz Lord, daughter, Michelle (Val) Simmons, sister Lauralie Twede Monsen, 12 grandchildren and many great-grandchildren. Also, his beloved Edward Family; Darla, Barr Jr, Shauna, Maurina, Brad, Valeen, Janie, Becki, Lance, Josh, Jana, and Ally. He is preceded in death by his parents, PQ and Delia Malan, siblings Bernice, Pearse, Donna, Ened, and Terry, daughter Lisa Malan Lord, son Steven Don Malan, and nephew Barr Edward. The viewing and funeral service will take place at the LDS Church at 900 West Pleasant View Drive, Pleasant View, Utah. Viewings are Friday, November 6 from 6:30pm to 8:30mp and Saturday, November 7 from 9:30am to 10:30am. Funeral service will be held Saturday, November 7 at 11am. Interment with military honors will follow at the Ogden Cemetery.

Don Terry Malan passed away on Monday, November 2 at 11:15pm at his home in Pleasant View, Utah. He was born on April 23, 1932 in Ogden, Utah to Parley Quince and Susan Delia Terry Malan. He spent his childhood and teenage years in Utah and... View Obituary & Service Information

The family of Don Terry Malan created this Life Tributes page to make it easy to share your memories.