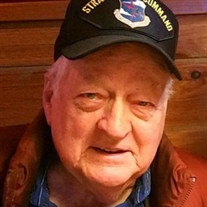 Donald J Atkinson born July 15th 1929. Passed away peacefully on April 17th 2019 after living a very full life. Not many people can walk into a room a stranger and within minutes be cracking jokes, telling fishing stories, talking guns and airplanes, and reliving the Steelers greatest plays with everyone in the room. He came into the room a stranger but always left with friends for life. He will be sorely missed not only by these friends but his family and loved ones as well. Don served at Ellsworth Airforce Base in Rapid City, SD from 1950-1954 as a Staff Sergeant. This is where he developed his lifelong passion for airplanes, especially his loved and admired B36. He helped maintain the B36 Peacemaker Bombers during his service in the Airforce. He could tell you anything you wished to know about them. Don also loved to fish. Anyone who ever got the privilege to go fishing with Don soon learned catching a fish with this man was exciting. It didn’t matter if the fish was 4 inches in length he would hoot, and holler with laughter as he reeled it in like it was the biggest fish ever. There was truly nothing as exciting as fishing with Don. His greatest love in life was Denise. They met at a singles potluck later in their lives and after a 26 day whirlwind romance where married in the Jordan River Temple August 26th, 1993. Don always told Denise that if he went first he was going to pitch a yellow pup tent right inside the pearly gates and that's where he would be waiting on her. So this is not goodbye for them at all, this is see you at the pup tent honey. Don is survived by his Wife Ruby Denise Atkinson, Sons Donald (Toni) Atkinson, Derek Atkinson, Daniel (Heather) Atkinson, Shawn Atkinson, Daryl (Shannon) Atkinson. Daughter Debra (Jeremy) Hodges. Step Sons Ronald (Jennifer) Thompson, Kevin Thompson and many Grandkids, Great Grandkids, and Great, Great Grandkids. He is proceeded in death by his Mother Anna Wolfinger. Father Joseph Henry Atkison. Son Doug Atkinson. Step Son Jeffrey Thompson and very Best Friend and fishing buddy Jack Hendrickson. Til we see you again Don, fly high. Graveside services will be at 12 noon on Tuesday April 23 at Centerville City Cemetery , 550 South 400 East, Centerville, UT 84014. A viewing will be from 10:30 a.m. to 11:30 a.m. on Tuesday at Premier Funeral Services 5335 South 1950 West, Roy, UT 84067.

Donald J Atkinson born July 15th 1929. Passed away peacefully on April 17th 2019 after living a very full life. Not many people can walk into a room a stranger and within minutes be cracking jokes, telling fishing stories, talking guns and... View Obituary & Service Information

The family of Donald J Atkinson created this Life Tributes page to make it easy to share your memories.