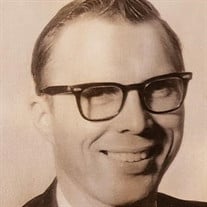 Donald Martel Chevalier, 87, resident of Herriman, Utah, was born October 13, 1931, in Shelby, Montana to Edmond Martel Chevalier and Myrtle Winifred Lickiss. He passed away peacefully Thursday, June 13, 2019, in Herriman, Utah surrounded by his loved ones. Don grew up in Dutton, Montana, the third of six children. From an early age, he learned the value of hard work and family. When he was 10 years old he began delivering newspapers. He only got paid once a year and that money was used to buy shoes and clothes for his family. He was a member of the US Air Force Reserve and served on active duty from 1951-1952, when he received an honorable discharge. In 1950 Don began dating his eternal sweetheart, Eleanor May Nelson. He proposed over the phone without telling her who was calling. Eleanor coyly replied, “Yes! Who is this?” They were married September 5, 1952 in Montana. They were later sealed in the Cardston Alberta Temple. Don worked many different jobs over the years, including being a butcher, a landscaper (He and his landscaping partner laid the first sod every laid in Montana.), a salesman for Culligan, an interviewer for the Montana State Employment Office, and a life insurance sales manager for Prudential. In 1969 he and Eleanor purchased Kiowa, near Glacier National Park, as a family business venture -- and to teach their children the value of hard work and of building something lasting. They spent the next 20 years working together as a family to build Kiowa Frontier Funtown into a successful business. In 1988, with most of their children grown and business dwindling, they sold Kiowa and Don turned his efforts to marketing the inventions he had been creating over the years. He could make something of value out of almost anything! They spent 54 years in the Great Falls area, raising their family, creating memories, touching lives, and sharing their love with others. Don loved his Savior, Jesus Christ. He was a stalwart member of The Church of Jesus Christ of Latter Day Saints. He was a gospel scholar and loved discussing and sharing his knowledge with everyone. It especially brought him great joy to share this love and knowledge with his posterity. He willingly served the Lord in any capacity, but he particularly enjoyed those callings that allowed him to teach others. He loved teaching institute classes to young adults and opening their minds to higher spiritual truth. He was a stake missionary for many years and served a full-time Welfare Mission with Eleanor in Salt Lake City in 1999. At age 46 he was called to be a Patriarch in the Great Falls Stake. He relished this role, and countless lives were touched by his service in this calling. Don was a people person. He loved meeting people and always had a story to tell. His grandchildren will fondly remember his stories of Hootnany Owl and his forest friends. He had a sharp intellect and loved inventing things. Don could fix almost anything, except cars. He could come up with a creative solution to solve almost any problem. Don was a gifted inventor, welder, artist, wood carver, builder, writer, and accomplished “jury-rigger.” He skillfully created works of art that will stand the test of time. He painted clown pictures which, for better or worse, influenced the personalities of his children. He loved wood carving and carved everything from sea horses and Winnie the Pooh to castles and Lehi’s vision. Don took the saying to heart that one man’s junk was another man’s treasure. His children and grandchildren can all attest that the jungle gyms he created for them (using boiler pipe coils from the scrap yard) in the shapes of a turtle, frog, snail, inchworm, and dinosaurs are treasured family heirlooms! Most importantly, Don and Eleanor created a loving family. He instilled his traits of serving, driving fast, working hard, thinking creatively, building something from nothing, teasing, fixing things, and problem solving in his 13 children. Above all else, none of his posterity will ever doubt Don’s commitment to the gospel of Jesus Christ and his Savior. He did all he could to instill that same love and commitment into his posterity. Don’s legacy will live on as his children share his creations, stories and traits with their families and friends. Don was preceded in death by his parents, 4 brothers, 1 sister, his son—Ronald Martel Chevalier, 2 grandsons, and 1 great grandson. He is survived by his eternal sweetheart—Eleanor May Nelson; 12 of his 13 children: Cindy (Tim) Hooper, Rick (Janet) Chevalier, (Lisa) Chevalier, Gary (Crystal) Chevalier, Michelle Roy, Bob (Emmy) Chevalier, Greg (M’Lisa) Chevalier, Jeff (Kathryn) Chevalier, Angela (Jeremy) Nelson, Mark (Lisa) Chevalier, Tami (Dan) Milbrandt, Jeannie (Steve) Ker, and Bethani Chevalier; 80 grandchildren; 71 great grandchildren and 3 great-great grandchildren. Funeral services will be held at 11:00 a.m., Saturday, June 22, 2019 at The Church of Jesus Christ of Latter-Day Saints Juniper Bend Chapel in Herriman, Utah (14868 W Juniper Crest Rd). Family and friends are invited to attend a viewing from 9:30-10:30 a.m. immediately prior to the funeral or from 6:00-8:00 p.m. Friday, June 21, 2019 at The Providence Chapel (4617 W Patriot Ridge Dr., Herriman, Utah). Interment at the Herriman Cemetery with full military honors will be immediately following the funeral services. Funeral services are under the direction of Premier Funeral Chapel.

The family of Donald Martel Chevalier created this Life Tributes page to make it easy to share your memories.