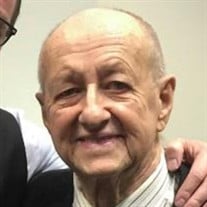 Donald Eugene Christiansen, 1934-2020 The first part of Psalms Chapter 90 and verse 10 says, “The span of our life is 70 years, or 80 if one is especially strong…” – That single sentence and it’s source can in a far too simple way, express the essence of a man who lived and was loved for more than 85 years. But to simplify Don “Pops” Christiansen in such a way would never do justice to the man that he grew to be, and the love that he had for so many. His road through life was windy, and filled with hills and valleys. He often spoke of how many miles he had driven. “I’ve driven over a million miles” was a phrase he would say. But that could very well apply to his life as well. Over the years, Don survived the loss of two wives, and mothers to his children. Heidi, his oldest daughter, then Ceven his son by his first wife Lavern Halsteinsgard. After Lavern’s passing he married Meredith Walker, adopted and became father to three more children, Theresa, Tamara, and Chris. His last child with Meredith was Caleb. He had many grandchildren and great grandchildren, and loved them all. He was proud of all of his children, even though he may have not always shown it as best as he wished he would have. During Pops journey through life he found what became the most important thing to him. His faith, and his love for Jehovah and he became one of Jehovah’s Witnesses. Jehovah is the God that Don grew to believe firmly was the one and true God. This faith directed Pops, helped him through loss, pain, disappointment, and his own failures in life. He loved his family, and he loved Jehovah, and he did the very best he could to prove that with every step he took. Even when he stumbled. Everyone who met Pops, fell in love with him. He had grown into the sweetest, and most genuinely caring man that no one could ever stay mad at, despite how stubborn he could sometimes be. That stubbornness and his faith gave him strength to continue through so much pain (both physical and emotional) for so many years into his retirement. He endured more surgeries than many people have scrapes and bruises. And his faith and love for Jehovah compelled him to “Witness” about his God until the last month of his life. Saying goodnight to him for the last time, is the hardest thing that we who loved him may ever have to do. But we also have the hope of seeing him again. Pops would have wanted anyone who misses him to know that he believed in the promise found in Job Chapter 14 verses 14 and 15. His God Jehovah will “call” him back again, and he will greet us again with every ounce of love that he had, until he closed his eyes to rest. A memorial talk for Donald will be given over a virtual platform on Sunday the 26that 1:00 Mountain time. If you would like information on joining the memorial talk please send an e-mail request to [email protected]

The family of Donald Eugene Christiansen created this Life Tributes page to make it easy to share your memories.

The first part of Psalms...