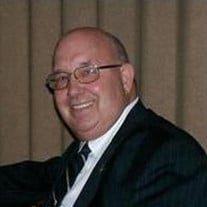 Donald Leroy Forsgren, 73 peacefully passed away Saturday, February 14, 2015. Don was born March 19, 1941 to Leonadus Leroy Forsgren and Emma Eliza Horspool in Garland, Utah. He was the sixth child of 14 children. He married the love of his life Sandra Lee Mikesell on November 20, 1964 and they were later sealed in the Logan Utah LDS Temple. Don graduated from Bear River High School in 1959, served and LDS mission in the New York State Mission and served honorably in the United States Army National Guard. Don worked for Hill Air Force Base for 33 years in a number or jobs. He retired as a Civil Planning Engineer in 1997. After retiring Don worked for Roy City as an Animal Control Officer, Vista Care Hospice and Walmart as a People Greeter. He was an active member of the Church of Jesus Christ of Latter Day Saints and served in many callings, including Ward Clerk and High Priest Group Leader, his true; love was serving The Lord by serving others. Don enjoyed working with the Boy Scouts of America and served several years as a Scoutmaster. He was an avid gardener and enjoyed spending his Saturdays working in the yard. Don is survived by his wife of 50 years, Sandra, four children Kelly M. Forsgren and wife Susan, Kevin L Forsgren and wife Julie, Tami Winward and husband Mike and Lori Player and Curtis. He was a proud grandfather of 28 grandchildren, seven great grandchildren with three more arriving soon. He is survived by 2 brothers and 7 sisters. He was proceeded in death by this parents, three brothers and one sister. A viewing for Don will be held on Wednesday February 18, 2015 from 6 PM to 8 PM at Country Pines Retirement Community located at 1748 W 1800 N, Clearfield, UT 84015. Funeral services will be held 11 AM on Thursday February 19, 2015 at the LDS Chapel at 5930 S 2200 W, Roy, Utah with a viewing at the church prior to services from 9:45 to 10:45 am. Don will be laid to rest at the Clinton City Cemetery following the funeral services.

Donald Leroy Forsgren, 73 peacefully passed away Saturday, February 14, 2015. Don was born March 19, 1941 to Leonadus Leroy Forsgren and Emma Eliza Horspool in Garland, Utah. He was the sixth child of 14 children. He married the love of his... View Obituary & Service Information

The family of Donald Leroy Forsgren created this Life Tributes page to make it easy to share your memories.