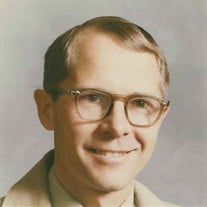 Donald Leroy Grimaud 1930 – 2019 Donald Leroy Grimaud, or Dondaud as nicknamed by his grandchildren, passed away July 29, 2019 from the combined effects of asbestos poisoning and Parkinson’s disease. His daughter Rochelle and family lovingly cared for him in his final days as his wife’s health dramatically declined along with his. Don was born September 27, 1930 to Lucille Mounteer Grimaud and Armand Lucien Grimaud in Pingree, Idaho. He endured many physical privations during his life due to growing up in the depression and WWII. He served in the Air Force during the Korean War and a mission for the Church of Jesus Christ of Latter Day Saints in Finland. From this, he started the tradition of singing all of the family birthday songs in Finnish. He received a teaching degree from BYU, where he met his wife Carol Ann Larson. They were married December 21, 1959 in Provo, Utah and later sealed in the Salt Lake Temple. Don and Carol (Melda to the kids) moved to Ferron, Utah where he taught woodshop at Castle Dale Jr. High. The family later moved to Cedar View, Utah just outside of Roosevelt where Dondaud and Melda lived for over forty years. He was employed by Dina Enterprises and helped adult handicapped individuals work at producing woodworking items and living productive lives. He worked at many other jobs in addition to support the family throughout his life. Dondaud loved to tinker and build wood crafts for people. One fun thing most people don’t know about him is that he was fabulous at roller skating. He had a gift of learning languages and learned to speak several well enough to help patrons in many languages while he was a temple worker in the Vernal, Utah temple. But French was perhaps his favorite and most beautifully spoken language. He made sure all the grandkids had a bicycle and kept the tires patched and pumped up. He wrote in his journal nearly every day of his life and had a deep and abiding belief in the gospel of Jesus Christ. Sadly, he suffered endlessly with mental health issues and hoped that one day he would find happiness and relief when he finally could be at rest with his Savior. In his final days he repeatedly reaffirmed his love for his family, which was meaningful because expressing that love had been awkward and difficult for him. Donald was the oldest of 8 children and is preceded in death by his parents, three brothers, Armand, Roger and Myron as well as his son, Lucien “Shen” Grimaud. He is survived by his wife of 59 years, Carol, his sons Gehri and Carl Grimaud and his three daughters Nicole Wilson (Don), Rochelle Bernal (Raul) and Lisel Christiansen (Chris) and 14 grandchildren in addition to his brothers Henry and Harold Grimaud and his sisters Marjorie Batty and Marie Osborn. A graveside service will be held at the Lehi City Cemetery August 1, 2019 at 10:00 a.m. where he will be laid to rest near his son and other family. Condolences can be sent to Carol Grimaud at 4028 E Mohican Drive, Eagle Mountain, UT 84005. Donald’s children would like to thank the neighbors in Cedar View and members of the 7th Ward for the love and care they took of Melda and Dondaud. They consider them family.

Donald Leroy Grimaud 1930 &#8211; 2019 Donald Leroy Grimaud, or Dondaud as nicknamed by his grandchildren, passed away July 29, 2019 from the combined effects of asbestos poisoning and Parkinson&#8217;s disease. His daughter Rochelle and family... View Obituary & Service Information

The family of Donald Leroy Grimaud created this Life Tributes page to make it easy to share your memories.