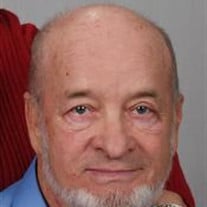 Donald Michael Johansen Died August 27, 2011 at his home Don was born in Acequia, Idaho on December 13, 1937 to Edward John Johansen and Reta Evaline Hardy. His spouse is Mary Louise Turner Johansen Don grew up in Idaho where he attended several schools excelling in basketball and eventually earning his GED. He joined the service in 1955 where he served for 4 years in the U.S. Navy Seabees. He was stationed in Africa and San Salvador and is a veteran of the Korean War. Don went to college on the GI bill after he was discharged from the service and eventually moved to Utah. He met Mary Louise Turner in 1968 and they were married in March of 1971. Don was a very hard worker and held many jobs during his life including farmer, heavy equipment operator, road and bridge construction, logger, manager of a potato processing plant, truck driver, prospector, salesman, mechanic, horse breeder, manager of 3 gas stations, owner of a lot maintenance business. Don loved the mountains. His hobbies included boating, camping, inventing things, playing with his horses and dogs, long drives, and walks with his wife. He is survived by his wife Mary Louise Turner Johansen of Lehi, UT; his children Deanne Phelps of American Fork, UT; Lisa Lundquist (Michael) of Downingtown, PA; Dawn Sabey (Casey) of Lehi, UT; Michael Johansen of Lehi, UT. His grandchildren Jeremy Phelps, Josh Sims, Jennica Sims, Jaden Sabey. His sisters Wandalee Anderson, Dorothy Hansen, both of Twin Falls, ID; and numerous nieces, nephews, cousins, and friends. Preceded in death by his brothers; Junior, Darold, and Blaine Johansen. Parents Ed and Reta Johansen. A memorial service will be held at the Officers Club at Camp Williams, 14400 Camp Williams Rd, Bluffdale, UT (off Redwood Rd.) on Monday, September 26 from 5:30-8:00pm. A very sincere Thank You to the ICU staff at American Fork Hospital, Dr. Marlan Hansen, and all of the loving, caring people at Intermountain Homecare Hospice of Orem, UT. If you wish to make a donation in honor of Donald Michael Johansen, the family requests donations are made to the Orem, UT division of Intermountain Homecare Hospice at: www.intermountainhealthcare.org/hospice and follow the links for online giving.

Donald Michael Johansen Died August 27, 2011 at his home Don was born in Acequia, Idaho on December 13, 1937 to Edward John Johansen and Reta Evaline Hardy. His spouse is Mary Louise Turner Johansen Don grew up in Idaho where he... View Obituary & Service Information

The family of Donald Michael Johansen created this Life Tributes page to make it easy to share your memories.