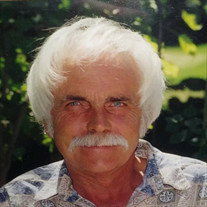 Donald Everett Johnson 03/07/46 - 05/07/20 Our beloved Father, Grandfather, Brother and Friend, Donald (Don) Everett Johnson, 74, of Roy, UT passed away peacefully at home on May 7, 2020 with his Son and Daughter by his side. Don was born on March 7, 1946 to Charles Grant Johnson and Olive Corrinne Ruud in Montpelier, ID. He married Jacqueline Jones in 1968. They were later divorced. He had two children, Shawn L (Wendy) of North Ogden and Shannon (Chad) Hancock of Ammon, ID. He moved his family in 1971 to San Jose, CA where they spent 10 years. They then moved back home to North Ogden, UT. He later moved to Roy, UT. He retired from HAFB as a Hydraulics Mechanic. Don most loved spending time with his two children and three Grandchildren, Hannah, Eliza and Heber and enjoyed spending time on his front porch listening to his many windchimes. He was a very skilled craftsman, woodworker and landscaper. He was preceded in death by his parents and his best friend, his dog, Donny. He is survived by his two children and his siblings, Charles (Julie) Johnson, Yakima, WA, James (Connie) Johnson, Roy, UT, Judy (Mark) Boe, Bountiful, UT, Robert Johnson, S Ogden, UT and Harry (Kelie) Johnson, Alice, TX, his three Grandchildren and many Nieces and Nephews. Don will be laid to rest at the Ben Lomond Cemetery in North Ogden, UT. There will be a private family viewing and graveside service on May 11, 2020. A special thank you to his Hospice Nurse, Lisa, from IHC Homecare and Hospice.

Donald Everett Johnson 03/07/46 - 05/07/20 Our beloved Father, Grandfather, Brother and Friend, Donald (Don) Everett Johnson, 74, of Roy, UT passed away peacefully at home on May 7, 2020 with his Son and Daughter by his side. Don was born... View Obituary & Service Information

The family of Donald Everett Johnson created this Life Tributes page to make it easy to share your memories.