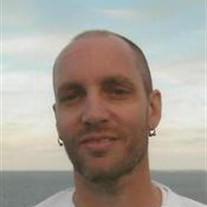 Donald "Don" Ray Lambing a loving Husband, Father, Son, Brother and Uncle passed from his earthly family June 9, 2011 at the age of 38 from cancer. Donald (Don) was born December 10, 1972 to Jerry and Jane Lambing in Washington, MO. He married a beautiful bride Lucinda “Cindy” Whitlock December 27th, 1991 in Phoenix, AZ. Later sealed together at the South Jordan Temple December 20th, 1997 . Together they had 3 children and had the pleasure of adopting 1 son. Don is survived by his loving wife Cindy and his 4 children: Shaylee (14), Kadon (8), Rayanna (5) and Koldon (1 ½). He is also survived by his mother and step-father Jane and Edward Torres of Hermann, MO, His mother-in-law Karen Whitlock of Saratoga Springs, UT. His brother Paul Nelson and wife Mary of Laveen, AZ his sister Faith Burdick of Phoenix, AZ, his adopted sister Amanda Paton of Dudleyville, AZ, sister Joy Page and husband Dean of Hermann, MO and sister Stephanie Klein and husband Paul of Columbia, MO, Brother-in-law Brad Whitlock of Centerfield, UT and sister-in-law Cheri Bertelson and husband Kory of Saratoga Springs, UT. He is also survived by 8 nieces, 6 nephews, 3 great nieces and 4 great nephews. Don is preceded in death by his Father Jerry, Father-in-law Sherwood , 2 Uncles Donald and Vernon Lambing and his grandparents Mike and Edna Lambing and Paul and Anna Marie Cebulak. Don was a loving husband, father, son , brother and friend to all who knew him. He attended Trevor Brown High School in Phoenix, AZ. After high school Don joined the Navy following in his big brother’s footsteps. He worked for his father-in-law for several years in his drywall company and then went onto driving semi’s. He loved working on cars and listening to music. His greatest joy in life was his wife and children. One of Don’s favorite things was to go camping and riding ATV’s in the mountains with his family. He also enjoyed traveling to Missouri and Arizona to see his mom, step-dad, sisters, brother and many Aunts, Uncles and Cousins. His family will miss his smiling face and infectious laugh. The family is grateful to all those that assisted Don during his illness, Intermountain Cancer Center of American Fork Dr. Breyer, Cathy and staff. Also Vista Care Hospice especially Dr. Garner, Diana, Suzanne, Celeste and Bob. Viewing services will be held Monday June 13th, 2011 from 6pm-8pm and one hour prior to the services at Lake Mountain 3rd Ward Church at 88 W. Harbor Parkway Saratoga Springs, UT 84045. Funeral service will be held Tuesday at 11:00am at the church with a graveside service following at American Fork City Cemetery 26 W. 600 North American Fork, UT 84003. In lieu of flowers the family requests that donations be made to the Lambing Family Donation fund at any Mountain America Credit Union.

The family of Donald Ray Lambing created this Life Tributes page to make it easy to share your memories.