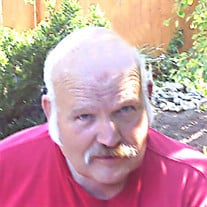 Donald Lee McBride 1955-2015 Don (Duck) passed away suddenly October 28th, 2015 at his home in Murray. He was born May 13th, 1955, the 2nd son of DeLanna Pollard (Dee McBride) and Glenn McBride. Don is survived by his mother, Dee, brothers, Ron and Lloyd, sister Tammy, nieces: Amber, Kymber, Brittany, Courtney, Jennifer and uncle Mel. Don was a graduate from Castle Heights Military Academy in Lebanon Tennessee and obtained an Associate’s Degree from Westminster College. He was an avid reader of both fiction and non-fiction and frequently could be seen reading or playing Sudoku in his van. He loved music and played the bass guitar. His career was as an electronic/mechanical technician, most recently for The CAO Group. The entire family knew and could count on him as the fix-it guy. Be it computers, TVs, stereos, cars, furnaces, pool pumps, or dishwashers, he either knew how to fix it immediately or found a schematic and figured it out. If it was “broke” we took it to him and it was repaired. He loved to go to movies and attended at least one most weekends. Although Don never had children of his own he loved kids and at family get-togethers he could be found sitting with them on the floor, a giant teddy bear to be jumped on, poked at, or decorated. Don was always the funny guy, rarely answering a question without his dry sense of humor. In fact, if you ever needed a serious answer, you might be disappointed. Since his name is Donald, from a young age, he had the nick name Donald Duck. His family all referred to him as Duck or Ducky. Be it family, friends, or neighbors, he was always willing to help others and we will all feel the loss of our special Duck. Services will be held Saturday November 7th at Murray 15th ward; 5555 South 700 West. Viewing at 10:00am, Service at noon. Graveside service immediately following at Elysian Gardens: 1075 East 4580 South.

The family of Donald Lee McBride created this Life Tributes page to make it easy to share your memories.