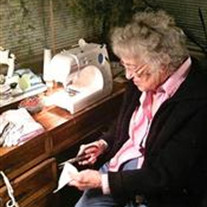 In Tribute Donna Mae Close Scott July 5, 1921 - January 11, 2014 By Sheri Bailey, a granddaughter Donna Scott was a Wife, Mother, Grandmother, Great Grandmother to some, and a close friend of everyone else. She didn’t think of herself as anything special, but we all know better. She exuded kindness. You didn’t have to earn her kindness, or even be worthy of esteem. She accepted people openly. It was automatic…for EVERYONE, and everyone who ever met her will feel her loss. Donna was part of the greatest generation. She witnessed first hand the march of progress through the modern age. Born in 1921, she was a child during the roaring 20’s, a teenager during the great depression, a young adult during World War II, a mother during the 60’s, and a experienced rider of the cultural roller coaster that has followed right up to today. Throughout those world-changing years, she took an active interest in events of the day, whether it was the arts and music, politics, technology, education, sports, or anything else of interest. She always expressed an admiration of progress (within reason), and gratitude for advances, especially in medicine. Donna joined the Church of Jesus Christ of Latter Day Saints as a youth of seventeen. From that point forward, she kept the faith with dogged determination. Her righteous choices have directly affected thousands of people in the raising of her family, and in endless acts of service to those around her. Donna married Willard Emmerson Scott in the Salt Lake Temple on November 21, 1949. They were married for 60 years, with him preceding her in death four years ago. She and Willard raised 8 children in the covenant. Each of her children have married their sweet-hearts in the temple and are raising her 60 grandchildren, who have been marrying in the temple, and raising her 69 (and counting) great grandchildren. In the family’s years together, 17 homes were lived in, hard work was done, money was earned, bills paid, delicious meals were prepared and hundreds of loaves of bread were baked. Gardens were planted, fruits were harvested and preserved. Callings of every kind in the Church were accepted, service was given, mission to Alabama was fulfilled, genealogy and temple work was done, testimony was born and scriptures and other good books read. Good friends were made, loved ones were born and lost, tears were shed – in laughter and sadness. Family gatherings – in graduating size - were enjoyed. Missionary letters and family letters were sent. Birthday Cards and Christmas Dollars were mailed without fail, and beautiful quilts were made for weddings, and new babies. Camping trips and vacations were taken – once even to Europe. Swimming in the Great Salt Lake was enjoyed. Games were won and lost, movies were watched and plays were attended, and music and singing were loved and performed. In Donna’s 4 years as a widow, she became a bit of a social butterfly. She served in the temple, attended various clubs and outings, visited, walked, shopped, flew around attending special events, and kept up with everyone’s news via the phone and email. She started a home business. She volunteered for Mitt Romney’s presidential campaign. She sewed baby quilts for her family, and other things for humanitarian aid. She took a special interest in a group called tiny tears, sewing tiny diapers and clothes - providing stillborn babies their only earthly wardrobe, and bringing comfort to grieving families all over the nation. Donna’s life was full: Full of love, full of challenges, full of miracles, full of friends and family, full of choices. Throughout all her challenges, and experiences, she chose faith. She had positive attitude. But not shallow, bubbly, pretended cheerfulness as one can sometimes find annoying. Her positive outlook came from a stubborn, unshakable faith that no matter what comes to pass, the Lord will bring us through it better than we were before. It that life long example I am leaning on today. I am leaning on that example of faith to get me through the loss of her. Grandma – we love you, we miss you, we promise to live like you did, so we can join you on the other side. Funeral services will be 12 Noon, Monday, January 20, 2014 at the LDS Chapel at 365 South 900 East, Orem, UT where a viewing will be Sunday, January 19, 2014 from 6 to 8 pm and Monday from 10:45 to 11:45 am. Interment 10:00 am, Tuesday, January 21, 2014 at the Utah Veterans Memorial Park.

In Tribute Donna Mae Close Scott July 5, 1921 - January 11, 2014 By Sheri Bailey, a granddaughter Donna Scott was a Wife, Mother, Grandmother, Great Grandmother to some, and a close friend of everyone else. She didn&#8217;t think of herself... View Obituary & Service Information

The family of Donna Mae Close Scott created this Life Tributes page to make it easy to share your memories.