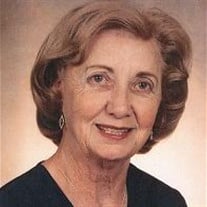 Donna Grace Brady Odekirk 1929 - 2018 Donna Grace Brady Odekirk, age 88 of Layton, Utah passed away, 17 January 2018, at her home from kidney failure. She can now be reunited with the love of her life, Heber Thomas Odekirk. Donna was born July 13, 1929 in Ogden, Utah. She lived most of her life in Ogden, Utah. After Tom’s death, she and her daughter moved to Layton, Utah. Donna accomplished many things in her life, she obtained her pilots license and flew with the “99s” for many years, she always had beautiful gardens, she completed a meaningful career with IRS and much, much travel. Her favorite thing in life was her family. She would always take as many children, grandchildren and great grandchildren as she could with her wherever she went. One family cruise in Hawaii, with everyone in the family, will always be remembered. She took time to “watch the kids”, attend all those games, recitals, teachers’ conferences and everything else involved with getting her children, grandchildren, and all the rest properly raised. In addition, she cared for her father (Ira Lee Brady), her mother (Myrtle Hedelius Brady) and her husband Tom Odekirk prior to each of their deaths. Donna was lucky enough to have most of her family living close to her. She was famous among each of the grandchildren as giving the best back tickles of anyone. Family parties, BBQ’s and get togethers allowed Donna to really know all of her family. Those that don’t live right here have called, come to visit, sent cards and always remained an integral part of her life. Donna is survived by her two children David Thomas Odekirk and Donna Gaylene Odekirk. Six grandchildren David (Nona) Brown, Christin (Jeff) Barfuss, Michelle (Tom) Russell, Shaun (Tracie) Odekirk, Scott (Sheila) Brown, and Jennifer Odekirk Wadman. She has eighteen great grandchildren: Zackery Brown, Eric Brown, Donavan Brown; Tyler (Jordan) Barfuss, Katelyn (Auston) Horrocks; Alicia Watkins, Austen (Tosha) Russell, Taylor (Jess) Russell, Curtis Watkins III, Lizzy Russell (Jay) Seastrand, Ian Watkins; Robert Odekirk, Crystal Odekirk, Thomas Odekirk, Savannah Day, Riley Day; Kaitlyn Brown and Rikki Sexton. She was also blessed with four great-great grandchildren: Abigail Odekirk, Remyington Sexton, Niki Russell and Cooper Russell. She also adopted, in her heart, many nieces, nephews and friends she loved along the way. A viewing will be held at the Oak Hills Ward, 1410 East Gentile Street, Layton, UT 84040 on Thursday evening January 25, 2018 from 6:00 p.m. to 8:00 p.m. Funeral services will be on Friday January 26, 2018 from 11:45 a.m. to 12:45 p.m. with viewing prior to the funeral services beginning at 11:00 a.m. Interment will be at Ben Lomond Cemetery. Mom, I will always know two things that you taught me: 1. No matter where I am or what I do, you will always love me and believe in me. 2. Our sort of people simply don’t behave that way.

The family of Donna Grace Brady Odekirk created this Life Tributes page to make it easy to share your memories.