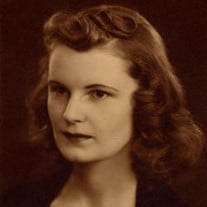 Dorothy Delight Dalley Caswell Parrish Passed away peacefully in her sleep on 15 July, 2015 at Bel Aire Senior Living in Orem, Utah. Born 13 January, 1924 to Arthur T. Dalley and Julia F. Amussen in American Falls, Idaho. Dorothy grew up on a small family farm in Aberdeen, Idaho, the fourth of six children. At age 20, after two years at the University of Idaho in Moscow, she moved to San Francisco to work for the Southern Pacific Railroad, where she met Marion Francis Caswell. They were married in San Francisco on 18 January, 1946, and resided in Berkeley where their three sons were born and raised. She and Marion divorced in 1968. Dorothy married Norman Charles Parrish, whom she had met while working at the University of California at Berkeley, on 16 January, 1976.They resided in Rheem Valley, California, until Norm’s death in 2002. About a year and a half later she moved to Utah to be closer to family members. Four of Dorothy’s siblings preceded her in death: Julia A. Dalley Ferguson, of Belmont, California, Dr. Arthur F. A. (Dick) Dalley, M.D., of Rupert, Idaho; Dr. Joseph W. A. (Winn) Dalley of Arlington and Lago Vista, Texas; and Carl J. Dalley, of Renton and Newcastle, Washington. She is survived by her brother, Vard A. Dalley, of Las Vegas, Nevada, sons Thomas H. Caswell III, of Orem, Utah; James M. Caswell, of Martinez, California; and Dennis A. Caswell, of Woodinville, Washington; twelve grandchildren,eighteen great-grandchildren and numerous cousins, nieces and nephews. An avid reader, musician, and gardener throughout her life, Dorothy was an accomplished artist, equally at home with oil painting, watercolors, and pastels. Funeral services will be 11:00 a.m., Saturday, July 18, 2015 at the Orem Heatheridge LDS Stake Center, 450 East 2000 North, Orem, Utah with a viewing prior to services from 9:45 to 10:45 a.m. Interment at the Orem City Cemetery, 1520 North 800 East, Orem, UT.

The family of Dorothy Delight Dalley Caswell Parrish created this Life Tributes page to make it easy to share your memories.