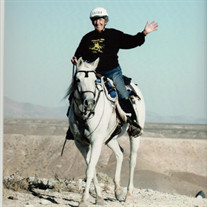 Dorothy Margaret (Dot) Wiggins, 90, longtime resident of Midvale and Eagle, Idaho passed away November 28.2020 in Sandy, Utah. She was born March 18, 1930 in Red Lodge, Montana to Marian Castle and Maxon T (Ted) Wright. On May 31, 1947, she married William LaRock in Helena, Montana. They were the parents of 2 daughters (Linda and Cindy) and a son (William). They divorced in 1976. December 16, 1977, Dot married Lyle Wiggins. Always a horsewoman, Dot grew up in Montana (mostly in Helena). She and her mom were charter members of the Helena Trail Riders. Over the years, she ran a riding academy teaching many children to ride. Dot also served as a 4-H leader and mounted drill team leader. Always willing to share her “horse” knowledge, she was a mentor to many. After she moved to Midvale in the early 70’s, she discovered endurance riding. She was no stranger to long distance rides having completed a 110 mile ride when she was 11. She loved endurance riding and the many friends she made over the years. She completed a total of just over 10,000 miles (8090 AERC miles and 2000 Limited Distance) on several horses. Her favorites being Scotch and Soda and Krissy. Dot exemplified the motto of AERC – To Finish is to Win. She taught us all to “Shut up and Ride” no matter the challenge. Dot was always a supporter of trail preservation and was one of the founding directors of the Weiser River Trail. She remained involved with the trail until the time of her death. In 2015, she was awarded the Ann Parr Trails Preservation award by the AERC. Dot is survived by daughter Linda (Dean) Bishop, adopted daughter Barb McGann (Jim), son in law Paul Cottam, brother Jim Creach, sister Micky Buddingh, 5 grandchildren, 13 great grandchildren and many friends. Preceded in death by her parents, husband, daughter (Cindy), son (William) and brother Newt. We will have a memorial service in the spring – date to be determined. Mom requested no flowers instead give to a charity of your choice or the Weiser River Trail. To see full obituary and send condolences go to www: premierfuneral.com

The family of Dorothy (Dot) Margaret Wiggins created this Life Tributes page to make it easy to share your memories.