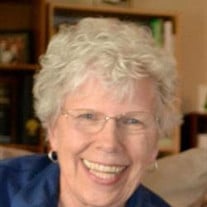 Dorothy Elaine Olson Hammond, our beloved wife, mother, grandmother, sister, aunt and friend to many passed away peacefully on January 28, 2014, surrounded by her loving family at her home in Salt Lake City. After being diagnosed with ovarian cancer in September 2009, the doctors expected her to only survive two months. But instead, she lived life to the fullest for four and a half more years. Dorothy was born in Berkeley, California in 1947 and attended Berkeley High School and UC Berkeley, where she majored in music education. She received a Masters of Music in Education from George Mason University. Dorothy spent much of her twenties exploring the world, including a mission trip to Africa and a move to Germany where she worked as a teacher for the Department of Defense. She used Germany as a base for many adventures, including a trip to Russia, the Middle East, and several trips all over Europe. Dorothy’s passion for travel continued the rest of her life; she visited 24 countries and all 50 U.S. states. While living in Germany, she met a young Army officer, Alan Hammond, and they were married on December 30, 1977. They had three daughters and as an Army family they moved frequently over the years. Dorothy taught all ages -- from kindergarten through college -- but her focus was elementary music, which she taught in many of the cities they lived in. After moving to Salt Lake City in 1999 and joining Mount Olympus Presbyterian Church, she became employed as the church administrator as well as wearing many other hats during her time at Mt. Olympus: Children’s Minister, Children’s Choir director, violinist in the orchestra in addition to many other roles. She was a woman who showed faith in action. In addition to being involved at Mt. Olympus Church and Community Presbyterian Church of American Fork, of which her husband is pastor, she played violin and was a board member of the American West Symphony and Chorus of Sandy. She was also a volunteer usher for the Salt Lake County Center for the Arts, which brought her much joy as she was always a great lover of the arts. Dorothy enjoyed staying active by doing yoga and riding her bicycle. She loved doing the Little Red bike ride in Logan, Utah, where she was a course marshal for several years, riding at least 60 miles, even after having battled cancer for three years. Dorothy was an amazing woman who set a wonderful example for her daughters. If she wanted to do something, she just did it. She was stoic, but so loving and giving of herself. She was independent-minded, but very dedicated to her family, friends, work, and various interests. Dorothy is survived by her husband of 36 years, Alan; her daughters Kristina (Mike Cassidy), Katie (Ryan Stalker), Abby (James Burch); grandson Alex Stalker; three sisters, Marilyn Ingram, Shirley Olson-Carey, Donna Olson and their families; and much extended family. She was preceded in death by her sister, Helen Shaw. The family would like to thank the Utah Cancer Specialists for providing Dorothy with many years of excellent and kind care, Bristol Hospice for their help in her last few weeks, and the many friends who have made their love for Dorothy known. In lieu of flowers, donations to Mt. Olympus Presbyterian Church, Community Presbyterian Church of American Fork, or American West Symphony and Chorus of Sandy are appreciated. A service to celebrate Dorothy’s life will be held on Saturday, February 1 at 11 am at Mt. Olympus Presbyterian Church in Salt Lake City.

Dorothy Elaine Olson Hammond, our beloved wife, mother, grandmother, sister, aunt and friend to many passed away peacefully on January 28, 2014, surrounded by her loving family at her home in Salt Lake City. After being diagnosed with ovarian... View Obituary & Service Information

The family of Dorothy Hammond created this Life Tributes page to make it easy to share your memories.