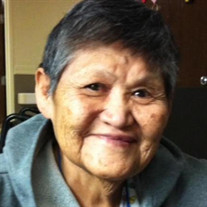 Dorothy Earl Kanuho 1943 - 2021 Dorothy Earl Kanuho was born August 14, 1943 to Tom Earl and Zonnie Hawthorne Earl in Cornfields, Arizona, she passed away in Provo, Utah on March 28, 2021. Our mother lived an interesting life, while at a young age into her late teens. Our Great Uncle Howard Hawthorne took an interest in our mother and wanted to give her a better education and take care of her, so while in the care of her Uncle Howard Hawthorne she attended schools in Colorado, South Dakota, Chicago. She would come home in the summers to be with her siblings and parents. Our mother had fond memories of growing up with her Uncle and Aunt. She later attended High School in Nevada, but unexpectedly had to come home to Cornfields, due to her mother’s illness. Our mother grew up being independent as a babysitter for one of the teachers at the schools, so she could earn her money and buy materials to sew her own skirts for school. By 1965 Dorothy soon became a mother to Randy, a year later Ronald, three years later Christine, by 1970 Dorothy and Jerome Kanuho were married the Navajo traditional way, officiated by her father, Tom Earl. A year after being married they had Karen and six years later Sharon and four years later Geraldean. Our mother had moved the family several times, at this time looking for work was hard, even harder with little ones. Dorothy worked as a cook for Motor Inn in the late mid 70’s in Window Rock, lived at a logging camp in Chevlon Canyon, when our late father finally acquired employment at Duke City in Winslow, the family moved to Winslow. Our mom worked at various food establishments, and finally in 1980 mom gained employment at her job she enjoyed at the Winslow Convalescent Center, Dorothy was a cook for Los Arcos in Flagstaff, a cook for a Rest Home in Oregon, a cook for a Rest Home in Provo, and finally retired. Dorothy received a certificate in nursing, working 13+ years at the Winslow Convalescent Center. Dorothy worked her way up to head nurse aid, she trained new nurses aides and worked right along with the RN. Our mom was well known for her cooking in the family, she was ALWAYS asked to maker her delicious fry bread, lamb stew and signature dishes and her yeast bread. Dorothy loved sewing little dresses for her granddaughters or crocheted baby blankets for new arrival of another grandbaby. She loved it when her grandkids would come visit her or when she used to be able to travel, go back to Arizona to her Nali’s. Our mom had crocheted round design of Navajo basket into pillows or potholders for family and friends. Dorothy always liked to joke around with her kids and grandkids and her Nali’s “about Jon”. Our mom especially like to joke with siblings, when she would get together with them. It met a lot for our mom to be around family, either her kids, grandkids and her siblings. She would never say “no”, when there was help needed at a family gatherings, she didn’t have to think twice about it. She is survived by her children: Randy (Elaine) Curtis, Ronald Curtis, Christine (Larry) Oso, Karen (Earl) Reichert, Sharon Kanuho, Geraldean Kanuho, 12 grandchildren, 9 Great Grand Children, Brothers Peter (Rose) Earl, Alfred (Shirley) Earl. She was preceded in death by her parents, Tom Earl, Zonnie H. Earl, Husband Jerome Kanuho, Brothers: Phillip Smith, Johnny Earl, Sisters: Juanita Paul, Violet Smith Chee, Louise Smith, Howard Earl. Gravesite Service will be held in Cornfields, Arizona on April 9, 2021, at 11:00 am.

Dorothy Earl Kanuho 1943 - 2021 Dorothy Earl Kanuho was born August 14, 1943 to Tom Earl and Zonnie Hawthorne Earl in Cornfields, Arizona, she passed away in Provo, Utah on March 28, 2021. Our mother lived an interesting life, while at a young... View Obituary & Service Information

The family of Dorothy Earle Kanuho created this Life Tributes page to make it easy to share your memories.