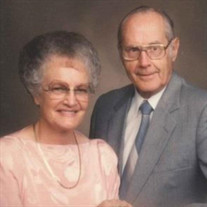 Dot Dixon Dahn, loving wife, mother, mother in law, grandmother, and great grandmother, passed away January 29, 2021. She was born April 6, 1926 in the ranch house on Camas Prairie, Idaho, to Riley Lyman Dixon and Alva Retta Robinson Dixon. She was the fifth of six children. Dot was a faithful member of The Church of Jesus Christ of Latter-day Saints all her life. She devoted much of her life to serving her Heavenly Father in various callings and capacities. She particularly loved Relief Society. Her education in her younger years was completed in Idaho. Because of WWll, she was able to leave high school early and attend college in Logan, Utah, during the years of 1943 – 1945. She attended what is now called Utah State University and majored in clothing and textiles. This knowledge allowed her to make clothing for her children, beautify her home, and make countless quilts. A mission to the North-Western States Mission was next for her life adventure. She served from 1946 – 1948. She loved serving and made wonderful friends. Dot married Henry Albert Dahn on February 3, 1950 in the Salt Lake Temple. Henry served a mission with Dot’s brother, Dwight, who introduced them and helped create a wonderful family. Henry and Dot lived for a short time in Salt Lake City, and then in Murray, Utah for 25 years and in Sandy, Utah for 18 years. They purchased a park model home in St. George, Utah and went back and forth between St. George, Sandy, and West Jordan for 13 years. In 2006 the family built an addition onto their daughter Kay’s home so Henry and Dot could be closer to family and receive help. Kay has dedicated years of her life to taking care of Henry until his passing on September 3, 2007 and Dot until the present time. The family is forever grateful for her loving, tireless efforts in caring for them. During all of these years Henry and Dot raised a family, worked hard, traveled as much as possible and served the Lord. They served two temple missions in Atlanta, Georgia and Sydney, Australia where dad had the opportunity of being a sealer. Throughout their years of service they served in four temples: Jordan River, Atlanta, Sydney, and St. George. They loved traveling. Or maybe Henry loved traveling and Dot was a good sport. They owned several trailers after abandoning the tents of their early years. They visited most of the United States as well as traveling to Europe, Canada, and Mexico. They even enjoyed a couple of cruises. Many of their trips included visits to temples. They had a goal of visiting every temple in the United States. President Hinckley’s major push to build more temples thwarted those efforts! The things which Dot wanted to be known for were her love of family and home, the Gospel of Jesus Christ, and God’s beautiful creations. She loved her family, temples, music, reading, learning, birds, and flowers. Dot was a dedicated mother, grandmother, and great grandmother. She made quilts and afghans for everyone she could. Denim quilts became something she loved making. She used every scrap of denim she could find. She covered many interesting things with single layer denim patchwork – grills, chairs, and anything else she felt was unsightly and needed a covering. One granddaughter had the audacity to buy denim to make a rather fancy denim quilt. Dot had no problem telling her she was doing it wrong because used, worn out denim was the proper thing to use. The title of mother and grandmother was one she took seriously. She spent many hours worrying over, reading to, and rescuing from disaster any child or grandchild she felt needed extra attention. She wrote letters, sent newspaper clippings, and prayed continually for her posterity. If her prayers were all that was needed to gain entrance to heaven, her posterity would all be allowed entrance. Dot was a wonderful example of Christlike service. She truly loved the Lord and was happiest serving others. The last months of her life were difficult because her mind wanted to get up and be about doing good, but her body wasn’t able to. Being bedridden has been the trial of her life because all she wanted to do was get up and take care of those around her. Dot is survived by Mark (Mary), Colleen (Jim), Kay, Tammy (Bob), Lois (Jon), 13 grandchildren, 20 great grandchildren with one on the way, and her sister DelOra Johnson. She is preceded in death by her parents, her brothers Clifton and Dwight, and her sisters Beth Cheney and Lois Bird. We are especially grateful to Kay who opened her home years ago to Henry and Dot. She has an honorary medical degree as she has seen them both through medical trials and trauma. We can never repay her kindness. Special thanks goes to AFI Hospice, her nurse Scott, and aides Emilee and Camille. Funeral services will be held Monday, February 1, 2021 at 12 pm at the Fontaine Claire LDS Chapel at 1465 W. Bristol Ridge Road, West Jordan, Utah. A viewing will also be held there from 10:30 – 11:30 am prior to the service. Interment will be at the Murray City Cemetery, 5600 S. Vine Street.

The family of Dot Dixon Dahn created this Life Tributes page to make it easy to share your memories.