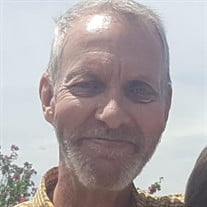 Douglas Gene Anderson, 70, passed away on Saturday, September 11, 2021, after an unexpectedly quick battle with cancer. Doug was born on November 5, 1950 to Ryland & Irene Anderson in Grantsburg, Wisconsin. He is the youngest of their five children. Growing up in Grantsburg always held a special place in Doug's heart. He always shared fond memories of being raised among aunts, uncles, cousins, siblings and friends. He shared funny stories, like the time, while his Ma was working as a phone operator, he decided to sing his heart out into the home telephone, not knowing that it was connected and everyone at the phone company was enjoying his performance. Doug loved his years in his hometown and lived there until graduating from Grantsburg High School in 1968. After several years of working, Doug met the beautiful, Linda Nelson. Doug & Linda were married on April 17, 1974 and welcomed their only daughter, Jennifer, the following year. After making their way to Roy, Utah, Doug & Linda spent the next 20 years providing a loving home for their daughter. Although their marriage ended, Doug remained in Roy until the month before his passing. For years, Doug worked in the computer industry, but spent his more recent years working at PolyExcel in Clearfield and leaves behind several friends and co-workers, especially Brian Wilson, who became very close with Doug over the years. Doug is a kind, light-hearted, funny man who was loved by all who knew him. His best friend of over 30 years probably knew him best. Doug loved, for years, spending Friday nights with Ray Bonsteel and spending several holidays with him and his wife, Jackie. Doug and Ray knew what the other thought without having to say a thing and they could just chat and laugh together for hours. There has been a sweet reunion with his parents, Ryland and Irene Anderson, and his beloved aunts and uncles and several cousins who have passed before him. Doug is the best Dad and adored by his daughter, Jennifer Chavez, who he so fondly refers to as "Niffer". Doug leaves behind his loving Niffer and her husband Jason Chavez, along with his grandchildren: Ceara (Andrew) Jessop in Twenty-nine Palms, CA; and Sam, Jackson, and Atticus Chavez, who live with Mom and Papa in Hamilton, MT. Doug is adored and survived by all of his siblings: Bob (Donna) Anderson in Anoka, MN; Yvonne Preminger in Virginia Beach, VA; Clyde (Maggie) Anderson in Apple Valley, CA; and Brian Anderson in Sunland, CA. Doug loved and was loved by his nieces and nephews: Bobby, Cheryl, John, Michelle, Mike, Lory, Steven, Hollie and Pete. It is so hard to say goodbye, but we will hold tight to the memories we have with him. Doug's remains will be laid to rest with his mother in Grantsburg, Wisconsin in June 2022. We would love to have any family & friends who knew Doug to join us next year as we gather to celebrate and remember his life. We will have more details as we get closer and encourage you to reach out to any of his family members for information, or email us anytime at [email protected]

Douglas Gene Anderson, 70, passed away on Saturday, September 11, 2021, after an unexpectedly quick battle with cancer. Doug was born on November 5, 1950 to Ryland & Irene Anderson in Grantsburg, Wisconsin. He is the youngest of their five... View Obituary & Service Information

The family of Douglas Gene Anderson created this Life Tributes page to make it easy to share your memories.