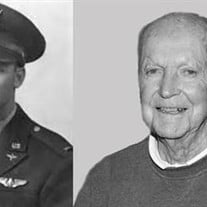 Duanne Trezona Hansen passed from this life on September 28, 2015 at the age of 98. He was born to Arthur Ernest Hansen and Elizabeth Jane Trezona Hansen on January 9, 1917. Duanne was a life-long resident of Salt Lake City, and frequently marveled at the growth and change that occurred in his hometown over the course of his life. Duanne was a graduate of South High School and attended the University of Utah. He married Helen Tonnesen on January 3, 1944; later sealed in the Salt Lake Temple. Duanne served as a bombardier and led a number of missions from North Africa during WWII. He retired from the Air Force Reserve as a Lieutenant Colonel. He worked for the U.S. Postal Service for many years. He loved golf, fly-fishing, hiking, camping, and Yellowstone Nat'l. Park. He had many cherished friends and family who love him and will miss him so very much. Duanne is survived by his son and daughter-in-law Gary and Judy Hansen, son and daughter-in-law Craig Hansen and Irene Fisher, and daughter and son-in-law Janice and David McCray; his three grandchildren, Kelly, Alex, Jesse (Karen); and two great-grandchildren, Courtney and Trey. He is survived also by sisters Marianne Daniels and Phyllis Geurts, and by special friend and companion Beverly Lund. Duanne was preceded in death by his parents and sisters Lois Brink, Beverly Mayne, Karen Nielsen, and Janice Hansen. His beloved wife, Helen, preceded him in death on Oct. 5, 1976. The family would like to thank CNS Hospice, especially Shellie Stanley, Yvonne McKenzie, Lisa DeMoss, and Brandi Bolton-Orr, for their compassionate care over the past several months. Friends and family are invited to pay their respects from 11:00 am to 12:30 pm on Thursday, October 1, at the East Millcreek 4th Ward (3103 E. Craig Drive). Graveside service and USAF Honor Guard will follow at 1:00 p.m. at Wasatch Lawn Memorial Park (1736 E. 3300 So.).

Duanne Trezona Hansen passed from this life on September 28, 2015 at the age of 98. He was born to Arthur Ernest Hansen and Elizabeth Jane Trezona Hansen on January 9, 1917. Duanne was a life-long resident of Salt Lake City, and frequently marveled... View Obituary & Service Information

The family of Duanne Trezona Hansen created this Life Tributes page to make it easy to share your memories.

Duanne Trezona Hansen passed from this life on September 28,...